Dax (Dacs in Occitan) is a commune in Aquitaine in south-western France, sub-prefecture of the Landes department.

It is particularly famous as a spa, specialising in mud treatment for rheumatism and similar ailments.

It is also a market town, former bishopric and busy local centre, especially for the Chalosse area. 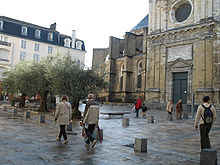 It was first established by the Romans, and its reputation is supposed to date from a visit by Julia, the daughter of the first Emperor Octavian Augustus. Its Roman name was Civitas Aquensium. In the Middle Ages, it was administered by viscounts until 1177. With the acquisition of Aquitaine by Henry II Plantagenet, later King of England, Dax remained under the English rule until 1451, when it was conquered by the French troops before the end of the Hundred Years' War. It successfully withstood a Spanish siege in 1521-1522.

Later Dax kept its tradition as a renowned spa site.