Charles Tennant
This article is about Scottish Industrialist. For his grandson, see Charles Clow Tennant.

Charles Tennant (3 May 1768 - 1 October 1838) was a Scottish chemist and industrialist. He discovered bleaching powder and founded an industrial dynasty.

Born at Laigh Corton, Alloway, Ayrshire to John Tennant (1725–1810) and his second wife Margaret McClure (1738–1784). The family had worked the land for generations and were friends with local poet Robert Burns (1759–1796). In Burns' epistle to "James Tennant of Glenconner" Tennant is mentioned as "wabster Charlie" (Scots language: weaver). This referring to the occupation on which Tennant had embarked, namely silk weaving, being apprenticed at the village of Kilbarchan, Renfrewshire.

Charles was the ninth of John Tennants sixteen children. As a baby, he moved from Laigh corton farm to Glenconner, Ochiltree, Ayrshire This was the humble beginning of the man who was destined to become founder and master of a mighty chemical empire and a great liberal reformer. He became one of the most progressive thinkers of his time.

He was fortunate to receive schooling both at home and at the Ochiltree parish school. He was apprenticed by his father to a master handloom weaver. This was a highly paid occupation, requiring great skill and considerable intelligence. Weavers were to be envied at the end of the eighteenth century for weaving had developed into Scotland's first industry, the counterpart of the woolen industry in England. Most farmers grew flax for their wives to spin and this, along with imported cotton, provided the material for many newly established cotton mills.

Charles was quick to learn his trade (weaving) but also to see that the growth of the industry far surpassed the development of bleaching methods, which were very primitive. An important aspect of the weaving industry was bleaching cloth. At that time this involved treatment with stale urine and leaving the cloth exposed to sunlight for many months in so called bleaching fields. Huge quantities of unbleached cotton piled up in the warehouses. Charles left his well paid weaving position to try to develop improved bleaching methods. This led him to start his own bleaching fields in 1788, at Darnley, near Barrhead, Renfrewshire. From his father he inherited an untiring capacity for work. A neighbour, William Wilson of Hurlet (and wife Margaret Penman), initially had been very hostile at the introduction of a bleachfield next to his farm. He changed, after watching with admiration as Charles worked from dawn till late at night in his bleachfilds. his admiration led to a social invitation which had a great impact on Charles' life, for he met and later (in 1795) married Wilson's daughter, Margaret (1766–1843). Their marriage lasted forty-three years and she bore him nine children.

Having acquired his bleachfield, Charles turned his mind and energy to developing ways to shorten the time required in bleaching. Others had already done much work on this problem and managed to reduce bleaching time from eighteen months to four by replacing sour milk with sulphuric acid in the bleaching process. Further, in the last half of the eighteenth century, bleachers started to use lime in the bleaching process, but only in secret due to possible injurious effects from the lime. Charles had the original idea that a combination of chlorine and lime would produce the best bleaching results. He worked on this idea for several years and was finally successful. His method proved to be effective, inexpensive and harmless. he was granted patent #2209 on 23 January 1798. He continued his research and developed a bleaching powder for which he was granted patent #2312 on 30 April 1799.

While still working in the bleachfields around the year 1794, Charles formed a partnership with four friends. the first of these, Dr. William Couper (His three sons married Charles' three youngest daughters.), was the legal advisor to the partnership. The second partner was Alexander Dunlop (His brother married Charles' eldest daughter), who served as accountant to the group. The third partner, James Knox, managed the sales department. Charles Macintosh, an excellent chemist, was the fourth partner. He is known for his technique of macintosh waterproofing and he also assisted in the invention of bleaching powder. Charles was indeed fortunate to have these men as his partners.

Immediately after granting of the patent on bleaching, Charles and his partners purchased land on the Monkland Canal, just north of Glasgow, to build a factory for the production of bleaching liquor and powder. The area was known as St. Rollox, after a French holy man. It was close to a good supply of lime, and since the area was rural, the land was cheap. Additionally, the nearby canal provided excellent transportation. Production was swiftly moved from the earlier bleachfields in Darnley, to the new plant in St. Rollox. From the first it was a splendid success. Production increased from fifty-two tons the first year, 1799, to over nine thousand two hundred tons the fifth year. Later a second plant was built at Hebburn, raising production of bleaching powder alone to twenty thousand tons by 1865.

All was not smooth sailing however. In 1798 James Knox and Robert Tennant (Charles younger brother), went to Ireland where they struck a deal with the Irish bleachers, for the use of the process. Although the Irish bleachers admitted a saving of over GB£160,000 in 1799 alone, by using the Tennant process, they never paid for its use as agreed. They welched on their word and on the contract. As a result the partnership lost a great deal in time and money. Further losses came from challenges to the patents in England and Ireland and the outright pirating of the process. In spite of these worrisome problems the partnership as a great success. It continued for fourteen years when the rights under the patents expired.

Charles continued to expand his horizons during this time. When the partnership ended he purchased the company. As a forward thinking business man, he was in a class by himself. His company, during the 1830s and 1840s was the largest chemical plant in the world.

As a dedicated reformer Charles played his full part in the movements of the day. A great deal of unrest followed the Napoleonic wars, which had the effect of increased wealth for the manufacturing classes but poverty for the working classes. Charles and his son John were active in a time liberal views could be construed as treason. He worked for many years in the reform movement, but it was not until he reached the age of sixty-four that his effort bore fruit with the passage of the Reform Bill of 1832. His ideas and active support helped create one of the most productive periods of social progress and reform, in almost every area, in Scotland's history.

Charles Tennant, in spite of the many demands on his time from outside sources, never lost sight of the main business in his life, the St. Rollox chemical works. By the year 1832, St. Rollox was consuming thirty thousand tons of coal a year. The system had not been designed to handle this volume. It just could not do so efficiently. He plunged into a study of possible solutions to the problem. His imagination and interest were fired by a new way of transporting people and freight. This involved using wagons, pulled by a steam engine, on iron rails laid on a level roadbed. He had heard of this from his good friend George Stephenson, the great railway engineer. he quickly realized this was the answer to his problem at St. Rollox. From 1825 until his death he was one of the prime movers in railway expansion. He was mainly responsible for getting a railway into Glasgow, over the fierce opposition of the canal proprietors.

Never one to overlook a sideline, Charles decided he must not forget the waterways. In 1830 he started his younger sister Sarah's son, William Sloan, with some small schooners. He saw this as a way to control the transportation of chemical products to nearby markets. At the time of Sloan's death in 1848 they had the largest fleet in Glasgow, and were running nineteen vessels.

Charles lived to see his empire grow to be the largest and most important in the world. He died on 1 October 1838. He was, beyond question, an entrepreneur of amazing ability. His dedication to his work, his family and his sense of what was right and fair lasted until the day he died. He was quick to champion those less fortunate, and the reforms he initiated and supported made the lives of his countrymen better. What a fine epitaph!

With the chemist Charles Macintosh (1766–1843) he helped establish Scotland's first alum works at Hurlet, Renfrewshire. In 1798 he took out a patent for a bleach liquor formed by passing chlorine into a mixture of lime and water. This product had the advantage of being cheaper than the one generally used at the time because it substituted lime for potash. Unfortunately when Tennant attempted to protect his rights against infringement, his patent was held invalid on the double ground that the specification was incomplete and that the invention had been anticipated at a bleach works near Nottingham. Tennant's great discovery was bleaching powder (chloride of lime) for which he took a patent in 1799. The process involved reacting chlorine and dry slaked lime to form bleaching powder, a mixture of calcium hypochlorite and other derivatives. It seems Macintosh also played a significant role in this discovery and remained one of Tennant's associates for many years.

In 1800 Tennant founded a chemical works at St.Rollox, Glasgow. The principle product being bleaching powder (calcium hypochlorite), which was sold worldwide. By 1815 the business was known as Charles Tennant & Co. and had expanded into other chemicals, metallurgy and explosives. The early rail network in Scotland and important mines in Spain were also areas of interest.

Tennant died on 1 October 1838 in Glasgow. He is buried in Glasgow Necropolis cemetery where his monument is in the form of a seated figure, the sculpture is by Patrick Park (1811–1855). The mighty business empire Tennant founded and the immense wealth generated allowed many of his descendants to marry into the British aristocracy, his grandson Charles Clow Tennant (1823–1906) becoming 1st baronet. The chemical business founded by Tennant became known as the United Alkali Company Ltd. and eventually merged with others in 1926 to form the chemical giant Imperial Chemical Industries. The chemical works at Springburn closed in 1964. The company still exists and has headquarters in Bath Street and a factory in Maryhill. 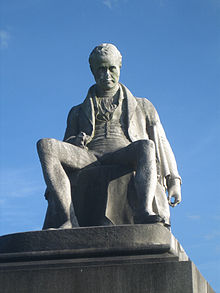