War Hawk is a term originally used to describe members of the Twelfth Congress of the United States who advocated waging war against the British in the War of 1812. The term has evolved into an informal Americanism used to describe a political stance of being for aggression, by diplomatic and ultimately military means, against others to improve the standing of their own government, country, or organization. This term is usually contrasted with the term dovish, which alludes to the more peaceful dove. The term war hawks, in modern use, describes those who seek war on a country or region.

The War Hawks are Democratic-Republicans, and were primarily from southern and western states. (The American West then consisted of Kentucky, Tennessee, and Ohio, as well as territories in the Old Northwest which did not yet have votes in Congress.) The popular impression that they were mostly younger members of the congress has been shown to be false in recent scholarship, and indeed those advocating war were largely from the older block of the Congress and encompassed most Republicans. [1] The War Hawks advocated going to war against Britain for reasons related to the interference of the Royal Navy in American shipping, which the War Hawks believed hurt the American economy and injured American prestige. War Hawks from the western states also believed that the British were instigating American Indians on the frontier to attack American settlements, and so the War Hawks called for an invasion of British Canada to punish Britain and end this threat.[2] 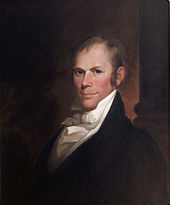 The term "War Hawk" was coined by the prominent Virginia Congressman John Randolph of Roanoke, a staunch opponent of entry into the war. There was, therefore, never any "official" roster of War Hawks; as historian Donald Hickey notes, "Scholars differ over who (if anyone) ought to be classified as a War Hawk."[4] Indeed, one scholar believes the term "no longer seems appropriate."[5] However, most historians use the term to describe about a dozen members of the Twelfth Congress. The leader of this group was Speaker of the House Henry Clay of Kentucky. John C. Calhoun of South Carolina was another notable War Hawk. Both of these men became major players in American politics for decades. Other men traditionally identified as War Hawks included Richard Mentor Johnson of Kentucky, William Lowndes of South Carolina, Langdon Cheves of South Carolina, Felix Grundy of Tennessee, and William W. Bibb of Georgia.[3]

The older members of the Party, led by United States President James Madison and Secretary of the Treasury Albert Gallatin tried unsuccessfully to defeat the War Hawks movement. They felt the United States was not prepared for war.[3]