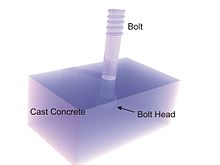 An anchor bolt is used to attach objects or structures to concrete. There are many types of anchor bolts, consisting of designs that are mostly proprietary to the manufacturing companies. All consist of a threaded end, to which a nut and washer can be attached for the external load.[1] Anchor bolts are extensively used on all types of projects, from standard buildings to dams and nuclear power plants.[2]

The simplest anchor bolt is a cast-in-place anchor. As seen in the figure, most designs consist of a standard bolt with a hexagonal head, which is cast in the wet concrete before it sets. There are other designs, some consisting of a bent bolt with a hook on the end, or some other sort of bending. Cast-in-place anchor bolts are the strongest type of fastener, but the casting is difficult, and they are usually only used for heavy machines mounted on poured concrete floors. Another use of this anchor bolt is to connect the concrete foundation of a building to its wall. With this, the building is more resistant to earthquakes. Currently there are several devices to assist in holding and in placing anchor bolt to set in the concrete. These devices mostly made from composite plastic. Once the concrete has been poured and set, the only other types of bolts that can be used are mechanical and epoxy bolts. Epoxy bolts are the strongest, but can be very tricky to install, since the epoxy has to be mixed to exact specifications, the hole must be very clean, and the set time has to be watched. As well, there must be a rigorous testing program. In Boston's Big Dig project, these procedures were not well carried out, which resulted in a large concrete slab crushing a motorist.

A concrete screw is another way of attaching things to concrete that has already been poured and set. 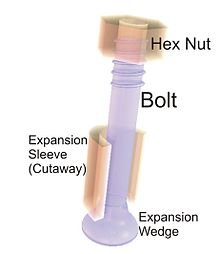 Wedge anchors, also known as expansion bolts and expansion anchors, secure themselves using a mechanical wedging effect at the end of the fastener. As shown in the figure, tightening the bolt results in a wedge being driven up against a sleeve. This jams the end of the bolt, and provides the strength. Many different manufacturers provide a variation on this theme, usually depending on the condition of the concrete, and the type of load. If a mechanical anchor fails, it is usually in the form of pulling out a wedge of concrete, and for this reason, proper design looks at the depth of embedment, and assures that the bolts are not spaced too closely. In many parts of the world seismic anchors are another specialized subject.[3] A specialized form of the anchor bolt is the rock bolt, used in rock excavations.

According to www.concrete fastners.com: "The wedge anchor that is called fully threaded is threaded for a major portion of its length. The diameter of the unthreaded portion is less than the nominal diameter of the threaded portion. The long threaded section allows considerable come-and-go for shimming and leveling of the item being secured. But, there is a downside to this feature. It is possible to install such anchors at a depth less than the minimum embedment requirement. Even when the anchor is inserted in a hole at a depth somewhat less than the minimum embedment specified, the nut can be torqued, fixing the anchor in place. Anchoring strength, however, is diminished.

This misapplication occurs more often than one might expect. The reason is that concrete commonly contains steel reinforcing bars, called rebar. Often an installer, while drilling the hole for and anchor, will run into rebar at a depth less than minimum embedment. When that happens, he ought to drill or cut out the bar, or move the hole, before continuing to drill the concrete. But when installing fully threaded anchor he sometimes won’t take the time and effort to do that."