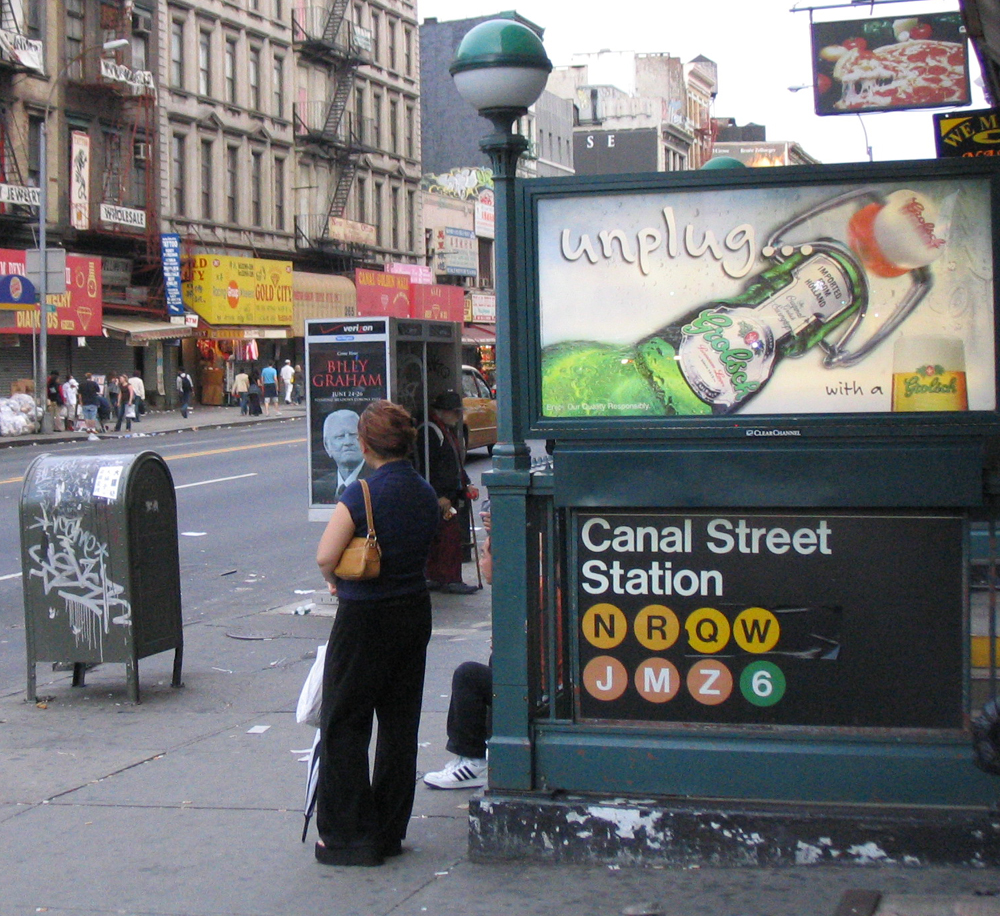 Canal Street is a station complex in the neighborhood of Chinatown, shared by the , the , and the . It is served by:
*NYCS|6, NYCS|J, NYCS|N and NYCS|Q trains at all times
*NYCS|R train all times except late nights
*NYCS|M and NYCS|W trains weekdays
*NYCS|Z trains rush hours in the peak direction
*NYCS|4 trains late nights

This complex was fully renovated between 1999 and 2004. The Broadway Main Line station was restored to the original look, with new mosaics featuring Chinese characters, reflecting the station's location in Chinatown. The symbols on the red wall plaques mean "money" and "luck", and the "Canal Street" name tablet has ideographs that actually read "China" and "Town." During the most recent renovation in the 1990s, the original mosaics were uncovered but then either removed or covered over again. One of original tablets has been preserved at the . 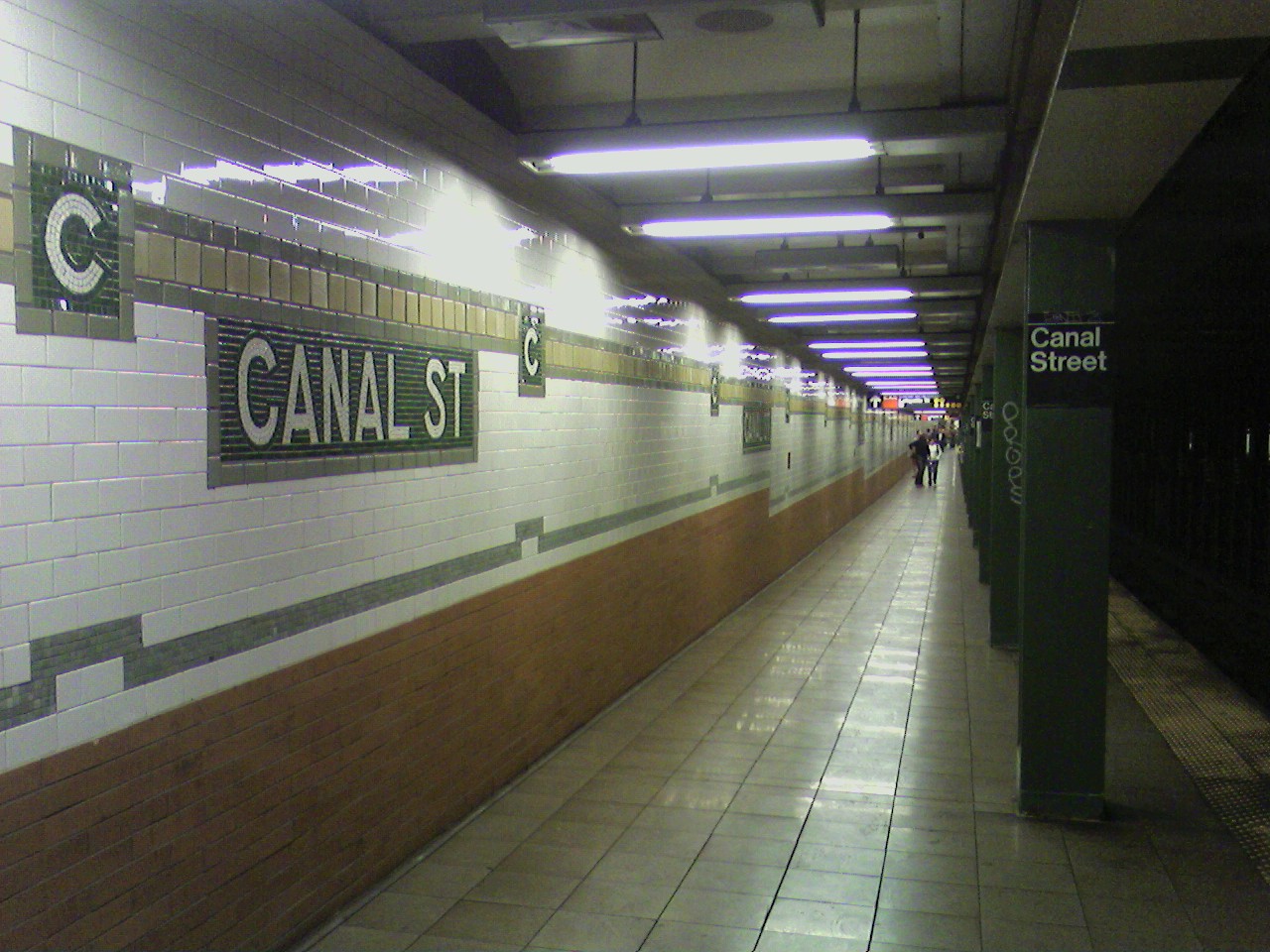 Canal Street on the IRT Lexington Avenue Line has four tracks and two side platforms. Due to platform lengthening in the 1940s and 1950s, there are two distinct sections of this station. The original portion has tile-covered s with small and large mosaics and an ornamental ceiling. The newer portion has 1950s green tile at the ends of the platforms. There are also IND-type "To Canal Street" signs. New lights are being installed. Non-original name tables and small "C" mosaics exist.

Canal Street on the BMT Nassau Street Line has three tracks and two s, but only the western island platform is accessible to passengers. Formerly, Canal Street resembled the typical express station, except that the inner "express" tracks dead-ended at the south end of the station, with a platform-level connection joining the southern ends of the two platforms. These stub-end tracks were occasionally used to terminate trains, most recently a weekend NYCS|J service in the late 1980s.

In the renovation, the original "Canal Street" mosaics were restored, and new wall and floor tiling were installed.

Canal Street on the BMT Broadway Main Line has four tracks and two s. However, only the local tracks provide through service on the BMT Broadway Line; the "express" tracks, which have never seen revenue service, begin at the lower level of City Hall station and run north to Canal Street, dead-ending about two-thirds of the way through. As part of the Dual Contracts, these express tracks were to have continued up Broadway, fed by traffic from via the ; local service was to have terminated at the upper level of City Hall. That plan was dropped in favor of local service via City Hall upper level and Montague Street and express service via the . Today, just north of this station, the tracks from the south side of the Manhattan Bridge rise up and replace the stub-end express tracks from City Hall lower level.

In the late 1970s, New York City Transit fixed the station's structure and overall appearance by replacin the original wall tiles, old signs, and incandescent lighting to the 70's style wall tiles, signs and fluorescent lights. They also fixed staircases and platform edges. In 2001, the station received a major overhaul, including state of the art repairs as well as upgrading the station for ADA compliance and installing new artwork on the wall tiling. Among the repairs included the staircases, re-tiling for the walls, new tiling on the floors, upgrading the station's lights and the public address system, installing ADA yellow safety threads along the platform edge, new signs, and new trackbeds in both directions, before taking the train service of the Broadway - Manhattan Bridge line.

Canal Street on the BMT Broadway Manhattan Bridge line has two tracks and two s. When it originally opened, this station was known as Broadway. Although technically located on the BMT Broadway Line, it was originally a distinct station from the main line. Located on a lower level and oriented perpendicular to the other station, it is fed by northbound rail traffic from the south tracks of the and by southbound express service from the Broadway Line. Under the Dual Contracts, this station was meant to be part of a crosstown line under Canal Street, running from the Manhattan Bridge to the ; however, prior to the opening of the Broadway Line, the BMT decided to route Manhattan Bridge traffic to the Broadway express tracks instead. A short section of tunnel heading westward from the west end of the station is a remnant from the original plans.

From 1988 to 2001, during the Manhattan Bridge reconstruction project, this station was temporarily abandoned, only used as part of the transfer between the Broadway local station and Nassau Street station. In 1997, an art exhibit known as the "Canal Street Canal" by Alexander Brodsky, was installed on the northbound trackway. It consisted a large waterproof tub filled with water, with Venetian canal boats floating inside. The station reopened on , with new tiling on the floors, upgraded lights and public address system, ADA yellow safety threads along the platform edge, new signs, and new trackbeds in both directions.