Metrophanes Kritopoulos was a Greek[3][4] born in Veria, Macedonia in 1589. Originally a monk on Mount Athos, he was a close associate of Cyril Lucaris. He studied at the University of Oxford in England and in Germany. He traveled to Europe and mingled with the greatest scholars and theologians of his day. He made Orthodoxy known in the West and was particularly concerned with the problem of unifying the Orthodox Church with the churches of Western Europe[5]. He taught Greek in Vienna (1627 - 1630). He was elected patriarch of Alexandria on 1636, where he put together an important library. He died in Wallachia on 1639. 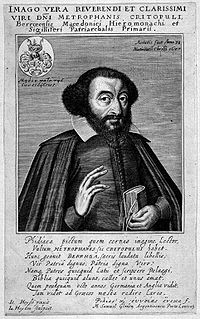