"Cheese-eating surrender monkeys", sometimes shortened to "surrender monkeys", is a derogatory description of French people that was coined in 1995 by a writer of the television series The Simpsons. The phrase has since entered two Oxford quotation dictionaries. After being popularized by National Review journalist Jonah Goldberg, it has frequently been used by journalists and academics. The phrase was particularly used in the run-up to the Iraq War, since France was opposed to military intervention in Iraq.

The phrase "cheese-eating surrender monkeys" first appeared in the American animated television series The Simpsons.[1] In the plot of the 1995 episode "'Round Springfield", budget cuts at Springfield Elementary School force the janitor Groundskeeper Willie to become a French teacher. Expressing his disdain for the French people, he exclaims to his class in his Scottish accent: "Bonjour, you cheese-eating surrender monkeys."[2][3][4] On the audio commentary for the episode, executive producer Al Jean said the line was "probably" written by The Simpsons staff writer Ken Keeler.[5] He also commented that the staff did not expect it to become widely used and never intended it as any kind of genuine political statement.[5] When "'Round Springfield" was dubbed in French, the word "surrender" was omitted and the line became "singes mangeurs de fromage".[6] 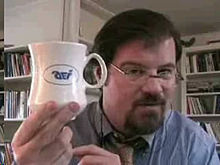 Following the appearance of the phrase on The Simpsons, "cheese-eating surrender monkeys" has become widely used by journalists in the media.[6] It was used particularly in the run-up to the war in Iraq, having been popularized by the right-wing National Review journalist Jonah Goldberg to describe European and especially French opposition to military action in that war.[1] Paul Starobin of the National Journal commented that "it fell to a pop-culturally informed conservative polemicist, National Review scribe Jonah Goldberg, to revive and popularize the insult in the prewar name-calling."[7]

However, Goldberg first used the phrase in April 1999 with no relation to the Iraq War, as the title of a column in the National Review on the "Top Ten Reasons to Hate the French". The reasons he listed included: the French people insisting that they are "one of the Big Four victors" of World War II despite surrendering Paris to the Germans "without firing a shot"; the French denying the United States overflight rights in their airspace under the 1986 bombing of Libya; and the French wanting "nothing to do with NATO" during the Cold War.[8]

Goldberg continued to use the phrase several times in what he has described as his "French-bashing columns".[9] In a July 2002 National Review column, he noted that the phrase had become frequently used by other journalists and that he takes "some pride in its wide currency, as I believe I am its most successful popularizer."[10] In this column, Goldberg discussed why hating the French had become so popular in America around that time. One of the reasons he gave was the two countries' different views on the War on Terrorism that began after the September 11 attacks.[10] By July 2003, Goldberg commented that he was starting to lose his "taste" for writing columns that criticize the French. He added: "Oh, I haven’t lost my distaste for the French, but French-bashing is so clichéd these days, I feel like I’m doing schtick when I talk about Cheese-eating surrender monkeys and the like."[9]

Ben Macintyre of The Times wrote in 2007 that the phrase is "perhaps the most famous" of the coinages from The Simpsons and since Goldberg's usage it "has gone on to become a journalistic cliché."[6] Following Goldberg's popularization of the phrase, it has been used by the New York Post (as "Surrender Monkeys") as the headline for its December 7, 2006, front page, referring to the Iraq Study Group and its recommendation that U.S. soldiers be withdrawn from Iraq by early 2008.[11] Articles in the Daily Mail have used the phrase in reference the French's "attitude problem"[12] and the "muted" European reaction to the death of Osama Bin Laden,[13] while The Daily Telegraph has cited it in relation to Anglo-French military cooperation.[14]

An article in The Guardian noted that Goldberg's use of the phrase during the time before the Iraq War made it "acceptable in official diplomatic channels around the globe",[1] and Slate's Chris Suellentrop commented in January 2003 that Goldberg made "cheese-eating surrender monkeys" the "rallying cry of Francophobes everywhere" in the time that led to the war in Iraq.[15] Laurie Morrow of the National Review wrote on May 7, 2003 that "there’s not a third-grader left who hasn’t heard and repeated this phrase these past months. Thanks to the war with Iraq, Americans have finally found an appropriate means of regarding the French — as the butt of a joke."[16]

The term has been used in books by commentator Laura Ingraham,[17] and academics Stuart Croft,[18] Stephen Chan,[19] and Paul L. Moorcraft and Philip M. Taylor.[20] Ned Sherrin included the quote in the Oxford Dictionary of Humorous Quotations; it was introduced in the third edition in 2005.[21] It is also included in the Oxford Dictionary of Modern Quotations.[22] Douglas Coupland's 2009 novel Generation A refers to Groundskeeper Willie's use of the phrase.[23]

On BBC 2's Top Gear, British television presenter Jeremy Clarkson described the French Renault Clio V6 as a "surrender monkey" in terms of handling at its limits.[24] In episode forty-six of the anime series Hetalia: Axis Powers, England wants to get a new hairstyle after being taunted by France that England's current style is "unsophisticated". After France gives England several haircuts he is not pleased with, France gives him the same haircut that he had at the start of the episode. This infuriates England, who leaps up and screams at France, calling him a "cheese-eating surrender monkey".[25]

In December 2005, the phrase was used by British United Kingdom Independence Party (UKIP) Member of the European Parliament (MEP) Nigel Farage who said the French President Jacques Chirac was "...no cheese-eating surrender monkey, he", in an unflattering comparison to Tony Blair during a session of the European Parliament following Blair's brokering of the EU budget deal.[26]