Naval Air Station Glenview or NAS Glenview was an operational U.S. Naval Air Station from 1923 to 1995. Located in Glenview, Illinois, a suburb of Chicago, the air base primarily operated seaplanes on nearby Lake Michigan, and later, P-3 Orions, stationed there as a staging point for Anti-submarine warfare against Soviet submarines. Before its closure, the base was also used as a staging area and departure point for aircraft participating in the annual Chicago Air & Water Show. In 1959 the Marine Corps established the Helicopter Squadron HMR-776 with the HUP-2 Helicopters. The squadron was redesignated to HMM-776 in 1962 and changed aircraft to the CH-34D. In 1972 the squadron was redesignated for the last time to HML-776 and changed aircraft to the UH-1E which was eventually upgraded to the UH-1N. This unit was deployed in 1991 in support of Desert Storm and returned 10 months later. The squadron was deactivated in 1994. This was also the home to MACG-48 C-130 Squadron until 1994.

The former air base has now been redeveloped into a residential subdivision and commercial area called The Glen, although the control tower has been preserved as a historic building. Hangar 1, including the control tower, was added to the National Register of Historic Places in 1998 as building #98001357. 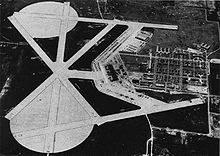 Aerial view of NAS Glenview in the late 1940s

The base was originally built by the Curtiss Flying Service and intended to be the hub of Chicago's air service. When the field was dedicated on 20 October 1929, it was home to the largest hangar built to that time, Hangar One.

Hangar One, one of the most advanced hangars at the time, included many innovations which were considered state-of-the-art in its time. A one gigacandela electric light was erected which allowed for airfield activity in the dark. Additionally, a system of carefully designed sliding doors created dividers for storage and zone heating. Glassed-in galleries allowed passengers the opportunity to watch the mechanics at work on the ground floor. A passenger-friendly restaurant and lounge were opened in the upper levels. A loudspeaker system informed the passengers of the flight arrivals and departures. The final cost for the airfield and Hangar One was $3 million in 1930. By adjusting the price for inflation, the relative cost in 2005 would be about $32.4 million. It was widely believed to be one of the Midwest's finest airports.

In 1930, the National Air Races took place at Curtiss Field and in 1933, the International Air Races took place there in conjunction with the Century of Progress. Such aviation luminaries as Charles Lindbergh, Wiley Post, and Jimmy Doolittle attended. In 1934, Post tried to set an aviation altitude record from Curtiss. By 1938, civilian and military operations both ran out of the field, but in 1940, it was sold outright to the United States Navy. The name was officially changed to the Naval Air Station Glenview on 1 January 1943.