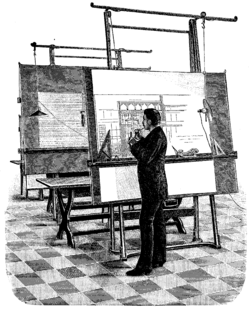 A 19th century architect at the drawing board

A drawing board (also drawing table, drafting table or architect's table) is, in its antique form, a kind of multipurpose desk which can be used for any kind of drawing, writing or impromptu sketching on a large sheet of paper or for reading a large format book or other oversized document or for drafting precise technical illustrations. The drawing table used to be a frequent companion to a pedestal desk in a gentleman's study or private library, during the preindustrial and early industrial era.

During the Industrial Revolution draftsmanship gradually became a specialized trade and drawing tables slowly moved out of the libraries and offices of most gentlemen. They became more utilitarian and were built of steel and plastic instead of fine woods and brass.

More recently engineers and draftsmen use the drawing board for making and modifying drawings on paper with ink or pencil. Different drawing instruments (set square, protractor, etc.) are used on it to draw parallel, perpendicular or oblique lines. There are instruments for drawing circles, arcs, other curves and symbols too (compass, French curve, stencil, etc). However, with the gradual introduction of computer aided drafting and design (CADD or CAD) in the last decades of the 20th century and the first of the 21st century, the drawing board is becoming less common.

Very often a drawing table could look like a writing table or even a pedestal desk when the working surface was set at the horizontal and the height adjusted to 29 inches, in order to use it as a "normal" desk. The only giveaway was usually a lip on one of the sides of the desktop. This lip or edge stopped paper or books from sliding when the surface was given an angle. It was also sometimes used to hold writing implements. When the working surface was extended at its full height, a drawing table could be used as a standing desk.

Many reproductions have been made and are still being produced of drawing tables, copying the period styles they were originally made in during the 18th and 19th centuries.

The phrase was coined in the caption to a Peter Arno cartoon of The New Yorker of March 1, 1941 (cartoon) 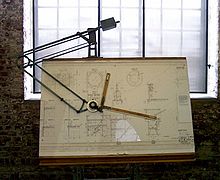 A drawing board with drafting machine, eliminating the need for a T-square 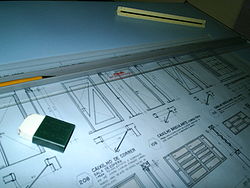 A modern drafting table with a parallel motion rule

Despite the prevalence of computer aided drafting, many older architects and even some structural designers still rely on paper and pencil graphics produced on a drafting table.

The steel frame allows mechanical linkages to be installed that control both the height and angle of the drafting board surface. Typically, a single foot pedal is used to control a clutch which clamps the board in the desired position. A heavy counterweight full of lead shot is installed in the steel linkage so that if the pedal is accidentally released, the drafting board will not spring into the upright position and injure the user. Drafting table linkages and clutches have to be maintained to ensure that this safety mechanism counterbalances the weight of the table surface.

The drafting table surface is usually covered with a thin vinyl sheet called a board cover. This provides an optimum surface for pen and pencil drafting. It allows compasses and dividers to be used without damaging the wooden surface of the board. A board cover must be frequently cleaned to prevent graphite buildup from making new drawings dirty. At the bottom edge of the table, a single strip of aluminum or steel may serve as a place to rest drafting pencils. More purpose-built trays are also used which hold pencils even while the board is being adjusted.

Various types of drafting machine may be attached to the board surface to assist the draftsperson or artist. Parallel rules often span the entire width of the board and are so named because they remain parallel to the top edge of the board as they are moved up and down. Drafting machines use precalibrated scales and built in protractors to allow accurate drawing measurement.