Oxford History of the United States

Oxford History of the United States 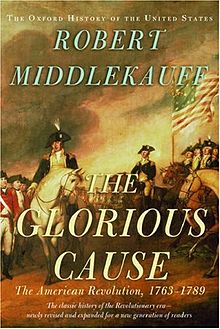 Cover of the 2nd edition of The Glorious Cause

The series originated with a plan laid out by historians C. Vann Woodward and Richard Hofstadter for a multi-volume history of the United States, one that would provide a summary of the political, social, and cultural history of the nation for a general audience. The project proved to be more challenging than initially envisioned, however. New fields of historical study emerged in the 1960s, and personal issues intervened for some of the authors. Among the historians connected with the series at one time or another were Willie Lee Rose, Morton Keller, John Lewis Gaddis, Stanley Elkins and Eric McKitrick. Though some of these historians completed books as a result of their respective assignments, none of them was published as part of the series.[1]

The first volume published in the series, Robert Middlekauff's The Glorious Cause: The American Revolution, 1763–1789, finally was released in 1982 (ISBN 0-19-502921-6). Included on the rear dust jacket flap to the original hardcover edition was a projected outline for the series at that point:

McPherson's volume on the Civil War and its causes was subsequently published in 1988 as Battle Cry of Freedom: The Civil War Era. Two more volumes followed under Woodward's editorship. Volume 10, Grand Expectations: The United States, 1945–1974 by James T. Patterson, was published in 1997, while Volume 9, David Kennedy's Freedom from Fear: The American People in Depression and War, 1929–1945, was published in 1999. Sellers's contribution was published separately from the series in 1991 as The Market Revolution: Jacksonian America, 1815–1846 (ISBN 0-19-503889-4), supposedly for its excessive focus on the economics of the era, and the volume reassigned to another historian.

At this time, the following volumes have already been published (in publication order):

A volume written by H. W. Brands covering Gilded Age America — Leviathan: America Comes of Age, 1865–1900 — was also to be published as part of the series, but was withdrawn in 2006[2] and published outside the Oxford History series in October 2010 as American Colossus: The Triumph of Capitalism, 1865-1900.

Volume 9 was also published in 2003 as two smaller volumes:

Volumes to be published

The following volumes are currently in progress:

For the most part, the publication of each volume has been greeted with laudatory reviews. Three of the volumes (McPherson's Battle Cry of Freedom, Kennedy's Freedom from Fear, and Howe's What Hath God Wrought) were awarded the Pulitzer Prize for History upon their publication.[5][6] Middlekauff's Glorious Cause and Wood's Empire of Liberty were finalists for the prize in 1982 and 2010, respectively.[7] Patterson's Grand Expectations also received the 1997 Bancroft Prize in American history.[8]

However, in October 2006 issue of the Atlantic Monthly, the magazine's book editor, Benjamin Schwarz, condemned some of the titles in the Oxford History of the United States as "bloated and intellectually flabby." He argued that volumes 9 through 11 in the series compared unfavorably to the entries in the New Oxford History of England, maintaining that the volumes "lack the intellectual refinement, analytic sharpness, and stylistic verve" of their English counterparts.[9] Schwarz wrote his review when only five volumes in the series were available, and he specifically exempted two (McPherson's Battle Cry of Freedom and Middlekauff's Glorious Cause) from his criticisms.