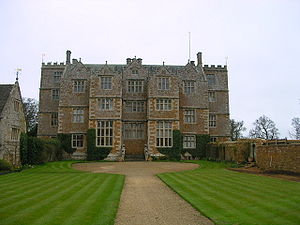 Chastleton House is a Jacobean country house situated at Chastleton near Moreton-in-Marsh, Oxfordshire, England (grid reference SP2429). It has been owned by the National Trust since 1991.

Chastleton House was built, between 1607 and 1612, for Walter Jones, who had made his fortune as a wool merchant[1] or possibly from the law[2] The estate was bought in 1604 from Robert Catesby, although his residence was demolished to make way for the new house. The house is built of Cotswold stone, round a very small courtyard.

The inside of the house is complex and quite labyrithine as there are a great many rooms, the foremost of which are the Great Hall, with its ornately carved wooden screen, and the first floor's Great Chamber, with its ornate panelling and plaster ceiling. The library holds a Juxon bible said to have been used at the execution of Charles I.[3]

The croquet lawn, situated ro the north of the house, was originally established by Walter Whitmore-Jones in the 1860s. His version of the rules of croquet published in The Field in 1865 became definitive, and Chastleton is considered the birthplace of croquet as a competitive sport[1][4]