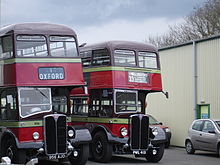 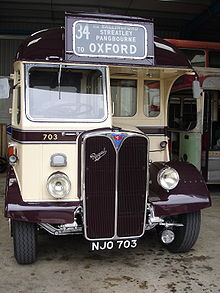 A vintage Oxford bus at the museum

The Oxford Bus Museum, of buses and other road transport associated with Oxfordshire, England, is in Long Hanborough, near Oxford.

The museum collection was established by the Oxford Bus Preservation Syndicate, who acquired a 1949 semi-coach in 1967. In 1984 the vehicles were moved to the museum’s present location on the site of the goods yard at Hanborough railway station, where covered accommodation was erected, being extensively refurbished in 2001 with support from the Heritage Lottery Fund. In the 1990s a collection policy concentrating on vehicles and smaller exhibits associated with the local area was adopted. Vehicles of the City of Oxford Motor Services Ltd, with its strong AEC buying policy and red livery, are strongly represented, from World War I to the minibus era of the 1980s, including a double decker sectioned to show its construction. Some 40 vehicles are on display, and there is a conservation workshop with public viewing gallery.

At the end of 2004 the Morris Motors Museum opened on the site, devoted to the history of the Morris Motor Company of Oxford and its founder William Morris, Lord Nuffield, and displaying a dozen vehicles in a reconstructed section of the former factory from Cowley.

The museum is operated by the Oxford Bus Museum Trust, a registered charity[1], and is normally open to visitors on Sundays, Wednesdays and Bank Holidays throughout the year; from Easter to the end of October it is also open on Saturdays. On the first Sunday of each month from May to October and at special events bus rides are offered.