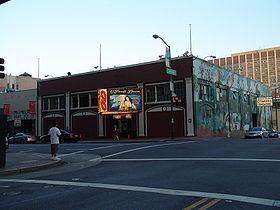 The Mitchell Brothers O'Farrell Theatre is a striptease club at 895 O'Farrell Street near San Francisco's Tenderloin neighborhood. Opened as an X-rated movie theater by Jim and Artie Mitchell on July 4, 1969, the O'Farrell remains one of America's oldest and most notorious adult-entertainment establishments; by 1980, the nightspot had become a major force in popularizing close-contact lap dancing, which would become the norm in striptease clubs nationwide.[1] The late journalist Hunter S. Thompson, a longtime friend of the Mitchells and frequent visitor at the club, claimed to be its night manager in 1985. He called the O'Farrell "the Carnegie Hall of public sex in America" and Playboy magazine praised it as "the place to go in San Francisco!"

The O'Farrell Theatre is open seven days a week and nearly every evening of the year. Customers must pay a comparatively steep admission price ($20–$50, depending on the time of day) and no alcoholic beverages are served, although a snack bar operates on the premises. The O'Farrell's main showroom is New York Live!, a continuous striptease show where one performer dances on stage while the others offer lap dances by asking customers, "Want some company?" The dancers then actually sit on the men's laps (a practice that is illegal in some other states) and insist on substantial tips ($20 is common). There are several themed rooms, such as the Ultra Room, a peep show-type room where patrons stand in private booths watching women perform with various props such as dildoes; the Green Door Room (named for the Mitchells' classic hardcore film Behind the Green Door and its sequel; it served as the principal set of the latter), the darkened Kopenhagen Lounge, where the customers use flashlights to watch the performances, and private booths of varying sizes (although not all dancers make themselves available for private sessions with customers) and onstage lesbian simulated-sex performances.

At the O'Farrell, male employees (including managers) must adhere to a strict dress code: black bowtie, white shirt, black slacks and black shoes. These sartorial requirements began in 1986 when the O'Farrell's then-general manager, the late Vince Stanich, noticed that all of his male staff members were dressed differently (and often not altogether presentably).

The Mitchell brothers opened the O'Farrell as an adult cinema on the site of a former two-story Pontiac car dealership. Upstairs they produced and directed the pornographic films they showed downstairs. Later, observing that the Condor Club in North Beach had been a topless bar since 1964 apparently with legal impunity, the Mitchells decided to make their establishment primarily a striptease club by having their carpenter build showrooms.

The Mitchell brothers' classic adult film Behind the Green Door premiered at the O'Farrell in 1972, with the brothers' parents in the audience.[2] The Mitchells produced and directed (and occasionally made cameo appearances in) many others of varying lengths, with mixed commercial and critical success.

In the 1980s, newly elected Mayor Dianne Feinstein walked into the O'Farrell and said, "I want to check this place out." Jim Mitchell, in the lobby at that moment, reportedly said, "Sure, if you buy a ticket." Feinstein walked out. Soon after, raids occurred, ostensibly to restore safety and health of exotic dancers and resulted in obscenity charges being filed against the Mitchells. The brothers, apparently not lacking a sense of humor, changed their marquee to read, "For showtimes, call..." and displayed Feinstein's unlisted phone number.[3]

In the early 1970s, the theater would stop its adult features at midnight on Wednesdays, then re-open as the 'Nickelodeon,' with five-cent admission and free popcorn. The audience of young hippies would be shown movies such as Marx Brothers or Abbott and Costello, Yellow Submarine, or other counter-cultural favorites, all non-pornographic, with much communal drinking and marijuana smoking, and general carousing. Inspections and disruptions by the fire department and police were common, but the shows usually continued until three in the morning or later.

The O'Farrell featured sex shows on stage until the courts ordered them to discontinue doing so.[citation needed] As well, the dancers in New York Live! originally were nude as they sat on customers' laps, but a judge instructed the O'Farrell's management to ensure that the girls, when doing lap dances, at least wore brassieres and underpants. Spontaneous onstage lesbian sex acts are still common at the O'Farrell.

The Mitchell brothers supported various cartoon artists, and when the 1984 Democratic National Convention was held in San Francisco, they opened the second floor of the O'Farrell to a group of underground cartoonists covering the convention for the San Francisco Chronicle.[4]

For a period in the early 1980s, the Mitchells, as a special attraction, featured "headliners," female porn stars who danced in the O'Farrell's Cine-Stage (a movie theater with a stage at the base of the screen). The management sold a separate admission ticket ($20) for those performances. On February 1, 1985, the Cine-Stage was raided by a dozen police officers during a headlining appearance by Marilyn Chambers (star of Behind the Green Door); the district attorney declined to press charges. Police later retaliated against a journalist who had suggested that the raid occurred to derail an ordinance that would have stripped police from rights to license adult theaters.[5] Perhaps because of the Marilyn Chambers incident (as well as the increasing financial burden of booking famous performers into the O'Farrell), the Mitchells virtually discontinued headliners. One exception was the late Megan Leigh (1964–90), a former house dancer who quit the O'Farrell in 1986 to begin starring in adult videos. Leigh returned at least once to dance in the Cine-Stage, presumably to sold-out crowds.

Over the years, the Mitchells were the defendants in over 200 court cases involving obscenity or related charges. Always victorious, they were represented by aggressive counsel[6] (Michael Kennedy, then Artie Mitchell's wife Meredith and, following her dismissal, the late Tom Steel and his law partner Nanci Clarence).

Hunter S. Thompson claimed in his 2003 book Kingdom of Fear that he had worked for a while as night manager at the club in 1985, an assertion repeated in some news articles.[4]

In February 1991, the theater entered the news after Jim Mitchell fatally shot Artie. Michael Kennedy defended Jim Mitchell and convinced the jury that Jim killed Artie because the latter was psychotic from drugs and had become dangerous (Artie had recently threatened to throw a Molotov cocktail into the O'Farrell's lobby; his brother, in 1996, established the "Artie Fund" to raise money for drug-abuse prevention). Jim Mitchell was sentenced to six years in prison for voluntary manslaughter and released from San Quentin in 1997, after having served half his sentence. (See the article on the Mitchell brothers for details.)

In 2004, two similar San Francisco clubs (the New Century Theater and the Market Street Cinema) were visited by undercover police officers, and some dancers allegedly propositioned them. The dancers were cited for prostitution and the managers for operating a brothel. The assistant manager at the Market Street Cinema told the police to investigate the Mitchell Brothers O'Farrell Theatre.[8] All charges were later dropped; these days, the authorities seem not to mind what transpires between the customers and dancers as long as it remains discreet.[1]

When San Francisco's Commission on the Status of Women proposed in 2006 to ban private booths and rooms at adult clubs because of concerns about sexual assaults taking place there, several O'Farrell dancers spoke out against the ban.[9]

Originally, the O'Farrell Theatre's management paid their dancers a flat fee per shift; in the 1980s, they replaced that fee with the federal minimum wage but allowed the women to accept tips.[citation needed] In 1994, Vince Stanich (the ecdysiasts' boss) created a separate company, Dancers Guild International (DGI), and changed the dancers' status from paid employees to that of unpaid "independent contractors" who had to pay DGI "stage fees" of up to $300 per eight-hour shift. Many O'Farrell stripteasers considered Stanich's new policy unfair and possibly illegal; two of them, Ellen Vickery and Jennifer Bryce, filed a class-action lawsuit against DGI (the plaintiffs would ultimately number more than 500), arguing that Stanich's reclassification of the dancers as independent contractors was unlawful and that they were owed back wages as well as a refund of the stage fees. The case was settled in 1998; the dancers were awarded $2.85 million.[10][3][11] Similar suits challenging independent contractor status have since been filed against numerous other strip clubs, and labor commissions as well as the courts have consistently ruled in favor of dancers and awarded past wages and stage fee reimbursements.[1] The O'Farrell's management still adamantly opposes all attempts of the dancers to unionize.

After the 1998 case, the O'Farrell changed the performers' payment structure again: they posted a "suggested" fee of $20 per lap dance and $40 per private performance and set a "quota" of $360 per woman per night; the women were allowed to keep half the quota plus all tips.[citation needed] However, it has been recorded on some occasions for lap dances to cost as much as $240. Dancers claimed feeling pressured into paying $180 per night even if they had earned less than that amount, and another 370-plaintiff class-action suit began in 2002. In 2007, a judge ruled in favor of the dancers, declaring the quota system illegal and requiring the O'Farrell to pay any amounts employees could show they paid to fill their quotas, minus any amounts the employer could show the dancers had collected but failed to report. The O'Farrell was also ordered to reimburse dancers for required theme-oriented costumes.[12]