The white perch, Morone americana, is not a true perch but is, rather, a fish of the temperate bass family, Moronidae, notable as a food and game fish in eastern North America.

The name "white perch" is sometimes erroneously applied to the white crappie.

Generally silvery-white in color, hence the name, depending upon habitat and size specimens have begun to develop a darker shade near the dorsal fin and along the top of the fish. This sometimes earns them the nickname "Black-Back." White perch have been reported up to 49.5 cm (19.5 in.) in length and weighing 2.2 kg (4.8 lbs.).

Although favoring brackish waters, it is also found in fresh water and coastal areas from the St. Lawrence River and Lake Ontario south to the Pee Dee River in North Carolina, and as far east as Nova Scotia.

There are commercial fisheries for white perch in the lower Great Lakes and Chesapeake Bay. The raw meat is of a somewhat pinkish hue, but when cooked, it is white and flaky. At times, a parasite known as Lironeca ovalis is located in the gills. They are only known to reduce the growing rate of white perch.

White perch are known to eat the eggs of many species native to the Great Lakes, such as walleye and other true perches. At times, fish eggs are 100% of their diet. They prefer to eat small minnows like mud minnows and fat head minnows. In the Chesapeake Bay, White perch commonly prey upon grass shrimp, razor clams and bloodworms which are all common to the region.

White perch are a prolific species. The female can deposit over 140,000 eggs in a spawning session, lasting just over a week. Several males will often attend a spawning female, and each may fertilize a portion of her eggs. The young hatch within one to six days of fertilization.

As for fishing, these fish put up a great fight for their size. They can be caught with blood worms, night crawlers or mackerel, on small hooks or double rigs. White perch also have a hard, scaly body that, along with their sharp fins, protects them from predators. When removing a white perch from a hook, one should hold the line gently in one hand and gently slide the other hand downward from beginning at the fish's nose while curling the thumb and touching the middle fingher. Doing so will gently collaps the spined dorsal fin and prevent an unexpected stick.

White perch are a popular fare for Chesapeake Bay fisherman and in many locations are considered a local favorite for a fish fry, breaded and baked, or even grilled with lemon juice and some fresh chopped vegetables.

The white perch is currently recovering from loss of population in the Hudson River. 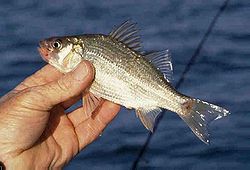 Some states consider the white perch to be a nuisance species due to its ability to destroy fisheries. They have been associated with the declines in both walleye and white bass populations because they feed heavily on baitfish used by those species and outcompete them for food and space. Many states have enacted laws forbidding possession of live white perch. Additionally, these states recommend not releasing captured white perch back into the water to help control its spread.