Deaf culture describes the social beliefs, behaviors, art, literary traditions, history, values and shared institutions of communities that are affected by deafness and which use sign languages as the main means of communication. When used as a cultural label, the word deaf is often written with a capital D, and referred to as "big D Deaf" in speech and sign. When used as a label for the audiological condition, it is written with a lower case d.

Members of the Deaf community tend to view deafness as a difference in human experience rather than a disability.[1][2]

Deaf culture is recognised under article 30, paragraph 4 of the United Nations Convention on the Rights of Persons with Disabilities, which states that "Persons with disabilities shall be entitled, on an equal basis with others, to recognition and support of their specific cultural and linguistic identity, including sign languages and deaf culture." 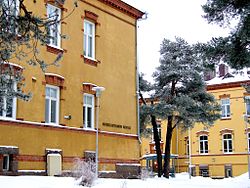 Historically, Deaf culture has often been acquired within schools for the deaf and within Deaf social clubs, both of which unite deaf people into communities with which they can identify.[1] Becoming Deaf culturally can occur at different times for different people, depending on the circumstances of one's life. A small proportion of deaf individuals acquire sign language and Deaf culture in infancy from Deaf parents, others acquire it through attendance at schools, and yet others may not be exposed to sign language and Deaf culture until college or a time after that.[4]

Although up to fifty percent of deafness has genetic causes, less than five percent of deaf people have a Deaf parent,[6] so Deaf communities are unusual among cultural groups in that most members do not acquire their cultural identities from parents.[7] 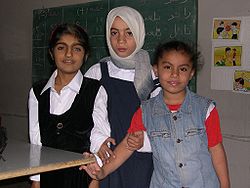 Students at a school for the deaf in Baghdad, Iraq (April 2004).

Anna Mindess notes that there is "not just one homogenous Deaf culture."[4] There are many distinct Deaf communities around the world, which communicate using different sign languages and exhibit different cultural norms. Deaf identity also intersects with other kinds of cultural identity. Deaf culture intersects with nationality, education, race, ethnicity, gender, class, sexual orientation, and other identity markers, leading to a culture that is at once quite small and also tremendously diverse. The extent to which people identify primarily with their Deaf identity rather than their membership in other intersecting cultural groups also varies. Mindess notes a 1989 study, which "found that 87 percent of black Deaf people polled identified with their Black culture first."[4]

Apart from using sign languages, Deaf culture has typical beliefs, values, and arts that help to define it.

A strong tradition of poetry and storytelling exists in American Sign Language and other signed languages. Some prominent performers in the U.S. include Clayton Valli, Benjamin Bahan, Ella Mae Lentz, Manny Hernandez, C.J. Jones, Debbie Rennie, Patrick Graybill, Peter Cook, and many others. Their works are now increasingly available on video.[9]

Culturally Deaf people have also represented themselves in the dominant written languages of their nations.[10]

Deaf artists such as Betty G. Miller and Chuck Baird have produced visual artwork that conveys a Deaf worldview.[7]

Deaf people who sign are intensely proud of their history. In the United States, they recount the story of Laurent Clerc, a Deaf educator, coming to the United States from France in 1816 to help found the first permanent school for deaf children in the country.[10]

Another well-known event is the 1880 Second International Congress on Education of the Deaf in Milan, Italy, where hearing educators voted to embrace oral education and remove sign language from the classroom.[11] This effort resulted in strong opposition within Deaf cultures today to the oralist method of teaching deaf children to speak and lip read with limited or no use of sign language in the classroom. The method is intended to make it easier for deaf children to integrate into hearing communities, but the benefits of learning in such an environment are disputed. The use of sign language is central to Deaf identity and attempts to limit its use are viewed as an attack. 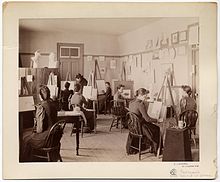 Deaf culture revolves around such institutions as residential schools for deaf students, universities for deaf students (including Gallaudet University, South West Collegiate Institute for the Deaf, and the National Technical Institute for the Deaf), Deaf clubs, Deaf athletic leagues, Deaf social organizations (such as the Deaf Professional Happy Hour), Deaf religious groups, and an array of conferences and festivals, such as the Deaf Way II Conference and Festival and the World Federation of the Deaf conferences.

Deaf clubs, popular in the 1940s and 1950s, were also an important part of Deaf culture. During this time there were very few places that the Deaf could call their own; places run by Deaf people for Deaf people. Deaf clubs were the solution to this need. Money was made by selling alcohol and hosting card games. Sometimes these ventures were so successful that the building used by the club was able to be purchased. However, the main attraction of these clubs was that they provided a place that Deaf people could go to be around other Deaf people, sometimes sharing stories, hosting parties, comedians, and plays. Many of today’s common ABC stories were first seen at Deaf clubs. The clubs were found in all of the major cities, New York City being home to at least 12. These clubs were an important break from their usually solitary day spent at factory jobs. [7]

In the 1960s, Deaf clubs began their quick and drastic decline. Today there are only a few spread out deaf clubs found in America and their attendance is commonly small with a tendency to the elderly. This sudden decline is often attributed to the rise of technology like the TTY and closed captioning for personal TVs. With other options available for entertainment and communication, the need for Deaf clubs grew smaller. It was no longer the only option for getting in touch with other members of the Deaf community. [7]

However, others attribute the decline of Deaf clubs to the end of WWII and a change of the job market. During WWII there was high demand for factory laborers and a promise of high pay. Many Deaf Americans left their homes to move to bigger cities with the hope of a factory job. This huge influx of workers into new cities created the need for Deaf clubs. When WWII ended and the civil rights movement progressed, the federal government started offering more jobs to Deaf men and women. People began switching from manufacturing jobs to service jobs, moving away from solitary work with set hours. Today, Deaf clubs are rare, but Deaf advocacy centers and other Deaf organizations have become widespread and popular. [7]

Initially known as visu-centric design. This concept began at Gallaudet University with the Sorenson Language and Communication Center (SLCC) building. This was designed by the SmithGroup. "Designed in its entirety for the needs of the deaf and hard-of-hearing, this unique academic building establishes a new level of architectural accommodation." [12] With soft corners, diffused lighting and wide circular pathways SLCC allows total visual access and connectivity. Automatic sliding doors compared to the traditional swinging doors allow continuous conversation, without unnecessary pauses. Metal railings can become visual obstructions, therefore are replaced by glass railings. [13]

The SmithGroup has won the following recognitions for the Sorenson Language and Communication Center:

In a clinical context, the term deafness (written with a lower case d) refers to a physical condition characterized by a relative lack of auditory sensitivity to sound compared to the species norm.[1] In a cultural context, the term "Deafness" (written with an upper case D) refers to cultural membership within a group that is composed mainly, but not exclusively, of people who are clinically deaf and who form a social community with an identity that revolves around deafness and the use of sign languages to communicate.[3]

The term hearing impaired is more likely to be used by people with a less than severe hearing loss and people who have acquired deafness in adulthood than by those who have grown up deaf. By contrast, those who identify with the Deaf culture movement typically reject the label impaired and other labels that imply that deafness is a pathological condition, viewing it instead as a locus of pride.[1]