Chase Tower is a 374-foot, 31-story building located in Amarillo, Texas, United States. Formerly known as SPS Tower and Bank One Center, it is the tallest building in Amarillo and the West Texas region. The building used to be the home of the Amarillo branch of American National Bank. The building also housed the offices of the city's electric power service provider, Southwestern Public Service (which was later acquired by Xcel Energy).[1] On July 2006, the Chase logo was installed on the Chase Tower.[citation needed] 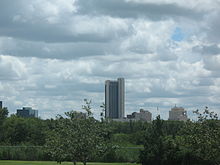 The Chase Tower dominates the skyline of downtown Amarillo.

In October 2008, the West Texas A&M University letters was install on the Chase tower as part of the agreement to have university classes there.[2] Aaron Emerson, took over the leasing of the Chase Tower in early 2006. Since then Emerson has successfully increased the occupancy of the Chase Tower from 60 percent to roughly 96 percent and still climbing. Though the tower was originally built in 1971, it was refurbished in 2007; several upgrades are still underway. Amenities to the Chase Tower are: Onsite security 24 hours per day 365 days per year, an onsite full service bank (Chase Bank), onsite management, onsite ownership, onsite leasing, WTAMU bookstore[3] , barber shop, the ground cafe, covered reserved parking (additional surface parking available), several ADA compliant restrooms, a private dining club on the 30th and 31st floors (Amarillo Club[1]) and a common conference room that can hold up to 150 people. Aaron Emerson with Emerson Commercial is the Leasing Agent for the Chase Tower.[citation needed]

The Tower has a striking resemblance to the One Financial Plaza Building in Fort Lauderdale, Florida. The Chase Tower is only about 3 stories taller than its counterpart.