The corporation acquired the former Union Carbide Corporation headquarters at 270 Park Avenue, and though it merged into Chemical Banking Corporation for $1.9 billion in 1991, the successor corporations down to today's J.P. Morgan Chase & Co. have continued to locate their headquarters in that building.

In 1987, the bank bought some of the branches of Dollar Dry Dock Savings Bank. In 1992, it bought the New York City branches of the failed Goldome. By 1992, it was running out of money due to savings account interest rates and bad loans.[citation needed] By the end of 1992, Chemical Bank had purchased the operations of Manufacturers Hanover Trust Company.

Prior to acquisition, the bank was sometimes referred to as "Manny Hanny."[4]

Timeline of mergers and name changes 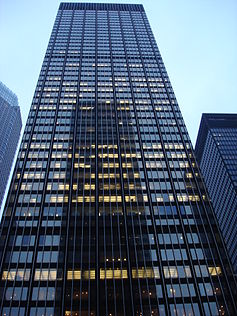