The name Manhattan Junction or Manhattan Beach Junction was applied to the station on what is now the Jamaica Line when it opened in 1885;[2][3] the area had been known as Manhattan Beach Crossing since before then,[4][5] due to the crossing of the Long Island Rail Road's Manhattan Beach Division. A station on the Fulton Street Elevated at Sackman Street opened on July 4, 1889,[6][citation needed] when the line was extended to Atlantic Avenue.

A two-track one-half-block elevated connection was built along on the east side of Vesta Avenue (now Van Sinderen Avenue) between the Fulton Street and Broadway Lines.[7] This connection, equipped with third rail, was opened on August 9, 1900, and new service patterns were implemented: during times other than rush hours, Lexington Avenue and Fulton Street trains were through-routed, and travel beyond Manhattan Junction required a transfer.[8][9] This "East New York Loop" was unpopular, and was soon stopped; the next service to use the tracks was the BMT Canarsie Line to Broadway Ferry (later the 15 train), joined to the Fulton Street Line at Pitkin and Snediker Avenues in 1906.[citation needed]

The name was changed from Manhattan Junction to Broadway Junction in 1913.[10]

The next west stop for the Fulton Street Line was Rockaway Avenue. The next stop east was Atlantic Avenue.

Broadway Junction is an express station on the BMT Jamaica Line that has three tracks and two island platforms. The middle express track is not used in regular revenue service. At each end of the station there are also track connections to the East New York Yard. Trains that run to/from that yard can terminate or begin at this station.

The station was originally called Broadway – Eastern Parkway, named for its original exit on the extreme west end of the platforms. This entrance is now closed. The ironwork for the old Fulton El trackways which can be seen under this portion of the complex from the platforms. The mezzanine is above the platforms and connects to the Canarsie Line and to the exit at street level via two long escalators. At street level, there is a transfer to the underground IND Fulton Street Line and the fare control area. The upper mezzanine extends most of the length of the platforms and is made of concrete. Windows were once present, but are now cemented over.

This station is one of the highest elevated platforms in the city, sitting above the already-elevated BMT Jamaica Line. As high as this station platform is, it plunges abruptly into a tunnel at the north end. This end of the station slopes sharply downward, and the platform end is about 200 yards (180 m) away from the tunnel's portal. A new diamond crossover has been installed here. A fine view of the East New York Yard can be seen from the northbound platform. The south end of the northbound platform divides into two "legs." Two normally-unused tracks connect the Canarsie and Jamaica lines. Now and then, a train being rerouted will use these tracks. The southbound track can be seen emerging beneath the two "legs" of the northbound platform; the northbound "flyover" with its severe curve can be seen just east of the station, beginning near the signal tower. Since 1999, this station has been undergoing a series of renovations, including new canopies, a new crossover (known as 'The Barn' because of its rustic red siding and white trim), and the removal of a hazardous crossunder. The old-style platform lights were removed and replaced with "loop" fixtures, widely seen elsewhere in the system.

From the northbound platform looking east, the control tower of John F. Kennedy International Airport in Queens can be seen over five miles (8 km) away. It is also possible to see planes landing and taking off from the airport.

The 2001 artwork is called Brooklyn, New Morning by Al Loving.

Broadway Junction is an express station on the IND Fulton Street Line, formerly called Broadway – East New York. It has four tracks and two island platforms. The fare control is at the east (railroad south) end of the station; this entrance also serves the J, L and Z trains via newly-replaced escalators from street to elevated level. There is also a police precinct located in the mezzanine. If there was a former western end exit, there is no longer any evidence of it.

This station remained an unfinished shell during World War II due to material shortages. Its tile band is unique in that it incorporates two types of tile – gloss and matte – in contrasting shades of cobalt blue (gloss border) and blueberry (matte center). When the station was renamed in 2007, the "EAST NY" tiles on the wall were removed and replaced by tiles reading "JUNCTION", in the matching IND copperplate font.

There is an active tower just past the head end of the Queens-bound platform.

East of the station are bellmouths. These bellmouths was built for a proposed extension along the BMT Jamaica Line, or for proposed Jamaica Avenue Subway.[11] It was not a provision for the IND Second System as were similar structures on other IND lines. One of these bellmouths has an emergency exit. There is nothing on the model board in the Broadway/East New York tower to show this provision. 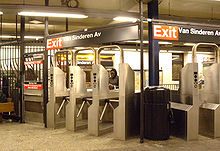