Freddy Got Fingered is a 2001 American comedy film directed, co-written by and starring Tom Green. Some of the scenes feature similar antics to those seen in his own The Tom Green Show and scenes in Road Trip. It is largely built around gross-out and shock humor. Much of the movie was filmed in Southern California and in Vancouver, British Columbia.

Freddy Got Fingered has been called one of the worst films of all time by many organizations and film critics.[2][3]

Green plays a 28-year-old slacker/cartoonist named Gordon "Gord" Brody, who is pursuing his ambition to obtain a contract for a TV show. He heads off for Hollywood, and subsequently gets a job in a cheese sandwich factory. He also goes to an animation studio looking for Mr. Davidson. He is told that he's out to lunch. Gord makes up a lie that he's a cop and that Mr. Davidson's wife died. He gets the name of the restaurant and quickly heads there to pitch his idea. After being told that his ideas are stupid and make no sense, he decides to move back home and rethink his future. When Gord's father (Rip Torn) questions Gord's life goals, and then proceeds in a fit of rage to destroy Gord's half-pipe, which Gord has spent a whole year building (thereby sending Gord over the edge), he subsequently gets even by having his father arrested on falsified charges of sexual molestation, destroying his parents' relationship and his family's reputation in the process.

Throughout the film, vignettes depict Gord's day-to-day activities, such as his sadomasochistic relationship with a paralyzed woman (Marisa Coughlan), and Gord's best friend's attempts to "go straight" by going to work at a bank. 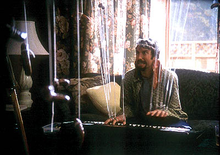 In a damning review, film critic Roger Ebert wrote that the film may more likely be seen one day as a "milestone of neo-surrealism" than funny. In this memorable scene, Gord ties sausage to his fingers, plays the piano poorly, and chants: "Daddy, would you like some sausage?"

Upon its original release, the film received overwhelmingly negative reviews, many considering it one of the worst comedy films of all time. Some reviewers gave the film zero stars. The Toronto Star created a one-time new rating just for Freddy Got Fingered, giving it "negative one star out of five stars." CNN's Paul Clinton called it "quite simply the worst movie ever released by a major studio in Hollywood history" and listed the running time as "86 awful minutes."[5]

Film critic Roger Ebert gave the film a rare zero-stars rating, listed it as one of his most hated films of all-time,[6] and described the film's humor thus:

Later, in his review of the film Stealing Harvard, Ebert wrote:

Freddy Got Fingered was also criticized for its offensive strong language and graphic blood seen throughout the movie.

Freddy Got Fingered began to see more positive praise over time. One of the few notable critics who gave it a generally positive review was A. O. Scott of The New York Times, who compared the film to conceptual performance art.[10] Another favorable review in August 2007 by Nathan Rabin of The A.V. Club partially fulfilled Ebert's prediction: Rabin called the film a "borderline Dadaist provocation" and rated it a "Secret Success"[11]

As of 2010 the film has received a large cult following. In Tom Green's interview on The Opie and Anthony Show, host Opie noted the film had begun to be regarded as 'one of the funniest movies ever made'.[12]

Green noted the film had sold a million units,[12] and that he wished to make a director's cut due to a lot of footage that did not make the original cut.[12] Green notes that he was not trying to make The Jazz Singer and that many fans of the movie shout out scenes from the film regularly at his stand-up performance.[12]

Unreality Magazine featured the movie in its list of "10 Hilarious Movies That Received Terrible Reviews", noting that critics' taste in comedies tend not to reflect the general public.[13]

Vadim Rizov for IFC.com wrote an article titled "In defense of Freddy Got Fingered". He calls the film one of the great underrated comedies of the decade and says the film would go on to do better if it was released today.[14]

The film received eight Golden Raspberry Award nominations in 2002 including Worst Supporting Actor (Rip Torn) and Worst Supporting Actress (for both Julie Hagerty and Drew Barrymore). It won in the categories of Worst Picture, Worst Actor (Tom Green), Worst Director, Worst Screenplay and Worst Screen Couple (Green and "any animal he abuses"). In acknowledgment of the critical consensus regarding the film's merits, Green appeared at the ceremony to accept his awards, saying:

Green eventually had to be dragged off the stage because he wouldn't stop playing the harmonica.

In February 2010, it was announced that Freddy Got Fingered was nominated for "Worst Picture of the Decade" for the 30th Golden Raspberry Awards.[16] It lost to Battlefield Earth.

On March 9, 2010 on Loveline, Tom Green officially announced that a "Director's Cut" will be released.[20] On a December 2010 answer to a fan question on his website tomgreen.com, Green said that there was no progress as of yet in regards to the director's cut.