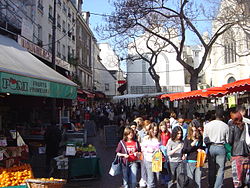 Street markets such as this one in Rue Mouffetard, Paris are still common in France. Resellers and farmers sell fruits and vegetables, but also meat and fish, and other produce. 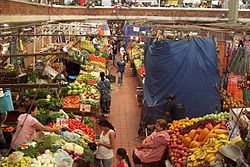 A marketplace is the space, actual, virtual or metaphorical, in which a market operates. The term is also used in a trademark law context to denote the actual consumer environment, ie. the 'real world' in which products and services are provided and consumed.

A marketplace is a location where goods and services are exchanged. The traditional market square is a city square where traders set up stalls and buyers browse the merchandise. This kind of market is very old, and countless such markets are still in operation around the whole world.

The Roman term for market, still in use in a related sense, is forum. The modern shopping mall can be seen as an extension of this concept.

The growing prevalence of Internet access has enabled new markets to emerge online. One example is eBay, a globally available auction house for products. The Internet has also allowed other marketplaces to thrive by connecting buyers and sellers from disparate locations. The formation of online marketplaces often occurs quickly in response to social or economic trends. Craigslist and Pricefalls, LLC are other websites that allow the public to trade goods and services. Internet marketplaces can further be categorized as B2B , B2C and C2C marketplaces. 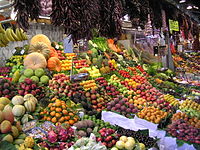 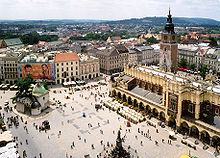