DNA footprinting is a method of investigating the sequence specificity of DNA-binding proteins in vitro. This technique can be used to study protein-DNA interactions both outside and within cells.

The regulation of transcription has been studied extensively, and yet there is still much that is not known. Transcription factors and associated proteins that bind promoters, enhancers, or silencers to drive or repress transcription are fundamental to understanding the unique regulation of individual genes within the genome. Techniques like DNA footprinting will help elucidate which proteins bind to these regions of DNA and unravel the complexities of transcriptional control. 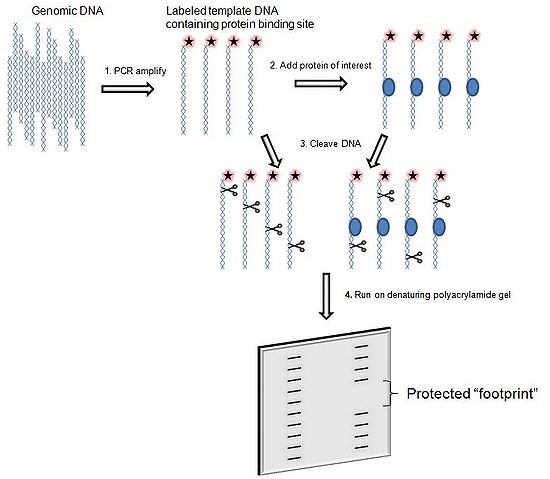 The simplest application of this technique is to assess whether a given protein binds to a region of interest within a DNA molecule. The wet lab methodology is summarized, with appropriate selection of reagents discussed, below.[1]

Note: Maxam-Gilbert chemical DNA sequencing can be run alongside the samples on the polyacrylamide gel to allow the prediction of the exact location of ligand binding site.

The DNA template can be labeled at the 3' or 5' end, depending on the location of the binding site(s). Labels that can be used are:

A variety of cleavage agents can be chosen. Ideally a desirable agent is one that is sequence neutral, easy to use, and is easy to control. Unfortunately none available meet all these all of these standards, so an appropriate agent can be chosen, depending on your DNA sequence and ligand of interest. The following cleavage agents are described in detail:

In 1978, David Galas and Albert Schmitz developed the DNA footprinting technique to study the binding specificity of the lac repressor protein. It was originally a modification of the Maxam-Gilbert chemical sequencing technique.[7]