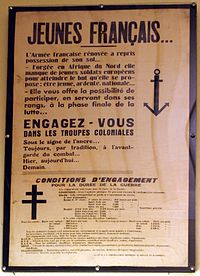 Call-up ad inviting citizens to enlist in French Colonial Forces, after colonies of North Africa (Algeria, Tunisia) had been reconquered by the Allies in World War II.

Colonial troops or colonial army refers to various military units recruited from, or used as garrison troops in, colonial territories.

Such colonies may have been located overseas or in areas dominated by neighbouring land powers such as China or Russia. Colonial troops have been used by Imperial powers whether ancient, such as Rome, or modern, such as Great Britain, France, Netherlands, Denmark, the United States, Germany, Italy, Spain, and Portugal. Sometimes they have been recruited under local leaders, as auxiliaries, at other times directly under pay and officers from the colonial power. They must in turn be seen as part of larger systems of power projection, which may also contain chains of overseas bases and refuelling stations, ships, aircraft, alliance systems and fiscal strength.[1]

At the beginning of the modern colonial period such troops were predominantly Europeans from the home army of the country concerned, but locally raised "native" troops were soon recruited. The latter normally served in separate units, at first under their own leaders, later under European officers.

The sepoys of the British East India Company were a major early example. By the mid 18th century these troops were beginning to be directly recruited and officered by the Company, allowing more systematic provisioning, drill and tactics. Some of the sepoys rebelled against the Company during the Indian Rebellion of 1857, or "Sepoy Mutiny", leading to the end of Company rule in India. After the British Raj took control in 1858, the sepoys formed the famous regiments of the British Indian Army, some of which survive to the present day in the national armies of Pakistan and India. The French and Portuguese colonies and enclaves in the Indian subcontinent also raised sepoys.

In the larger colonial possessions the garrison was likely to comprise both locally recruited and white troops. The latter might be from the home or metropolitan army, from settlers doing their military service or occasionally from mercenaries recruited outside the territories of the colonial power concerned. The French "Army of Africa" garrisoning Algeria, Morocco and Tunisia comprised all of these elements. The Dutch had a similar mix of locally recruited and metropolitan troops comprising their garrison in the East Indies. While the Sikhs, Punjabis, Jats, Baluchis and other "martial races" making up the bulk of the Indian Army were recruited from British subjects, the ten regiments of Gurkha Rifles were recruited from outside British territory.

Many colonial powers have sought to recruit minority peoples, such as the Ambonese in the Netherlands East Indies (NEI), to counterbalance majority populations seen as potentially rebellious, such as the Javanese. Such minority groups, and those with records of loyalty in revolt, are often designated 'martial races', their supposedly superior martial qualities propagandized, and rewarded with additional incentives. In each case however the colonial power may face a dilemma: when military developments make numbers a priority, it must trust the majority and so risk loss of control, or rely on minorities combined with large numbers of expensive European or other non-local troops. The French Army of the Levant provided an example of the latter option. Raised to garrison Syria and Lebanon from 1920 to 1943, this force of about 10,000 men (in 1938) was predominantly recruited from Alawite, Druze, Kurdish and Circassian minorities, augmented by North African, Senegalese and French Foreign Legion units.

The British Army rotated large numbers of its regular troops through India and other overseas possessions, augmenting the local colonial forces. However it is notable that British forces in Nigeria and other West African territories were under normal circumstances nearly all locally recruited, except for officers, some non-commissioned officers and a few specialists.

Changes in colonial ruler usually meant the continuation of local recruitment - often from the same sources. Both the United States and Spanish rulers of the Philippines employed Filipino troops from the same regions and tribal groups. In the 1830s the original zouaves were volunteers from a tribal group which provided mercenaries for both the Turkish and French rulers of Algeria.

Colonial troops may comprise local forces drawn from settlers in colonies where these were numerous. In the 18th century militia units were raised in Colonial America. A large portion of the forces maintained by Spain and Portugal in South and Central America until the early 19th century were locally recruited. Colonial militias in Australia, Canada and New Zealand formed the origins of the modern armies of these countries.

The advantages of locally recruited troops in colonial warfare were several. They had familiarity with local terrain, language and culture. They were likely to be immune from disease in areas such as the West Indies and West Africa which were notoriously unhealthy for European troops until the beginning of the 20th century. "Native" troops were usually recruited from tribal or other groups that had long established martial traditions. It was not uncommon for colonial armies to favour the races that had shown fiercest opposition to the initial conquest of a given territory (examples being the Sikhs of India and the Rif tribesmen of Morocco). Colonial units could be employed in campaigns or conditions where the use of conscripts from metropolitan regiments would be politically unpopular. At the same time the use of local troops often made the actual colonisation more palatable for the locals.

Colonial troops could be used to garrison or subdue other territories than those where they were recruited, thereby avoiding problems of conflicting loyalties. As an example Italy used Eritrean askaris in Libya and during the two wars with Ethiopia (1898 and 1936). Indian regiments garrisoned Aden, Singapore and Hong Kong at various times in the nineteenth and early twentieth centuries. During the 1950s the Portuguese used African troops from Mozambique to garrison Goa and the Dutch had employed West Africans (Zwarte Hollanders) for service in the East Indies during much of the nineteenth century.

Colonial troops were usually more lightly equipped than their metropolitan counterparts (to whom priority in issuing new weaponry was usually given). This arose primarily from the predominantly light infantry or cavalry roles of colonial forces, designed for low intensity colonial warfare against poorly armed opponents in difficult country. Until World War II, it was rare to find artillery or mechanised units comprising indigenous troops (although the Italian colonial army maintained a number of Eritrean, Somali and Libyan mule artillery batteries; and there were locally recruited mountain batteries in the Indian Army). This relative lack of up to date weaponry and training put colonial troops at an initial disadvantage when facing modern opponents such as the German or Japanese Armies of World War II.

Even earlier, the African and Indian troops sent to France in 1914 had encountered a climate, diet and general conditions of service that differed greatly from those with which they were familiar. The African tirailleurs of the French Army had to be withdrawn to southern France for recuperation and training during the harsh winters of the Western Front. All Indian troops (with the exception of some cavalry regiments) were withdrawn from the Western Front in October 1915, to serve in Mesopotamia, Palestine and East Africa.

On the other hand the regiments of the Indian Army, who were an army in their own right with responsibilities in the wider Empire and were thus equipped as such (apart from not having certain capabilities), were able to take on the Turks, Germans, Italians and later Japanese more or less on their own (though there was always a substantial British presence). In the early stages of World War I (November 1914) a British-Indian expeditionary force suffered a major defeat by well trained and led German colonial troops at the Battle of Tanga in East Africa. At the same time however two divisions of Indian infantry fought with distinction in France in a type of war and climate for which they had had little preparation.[2]

The selection of particular tribes for use in the colonial military, in conjunction with the tendency of colonial powers to label tribes with specific character traits, lead to the intensification of rivalry between ethnic groups within the colonies. This rivalry could, arguably, be considered as one of the causes of some post-colonial ethnic conflicts. This can be seen in the British theory of Martial Races and the use of a policy of divide and rule throughout its Empire; for example in the use of the Turkish minority to police Cyprus during their rule.

Use outside areas of origin

By the 20th Century, colonial troops were often being used outside the boundaries of their territories of origin. Troops from France's North African colonies served in the Crimean War, the Franco-Prussian War and most notably in the trenches of World War I in France itself. France also made extensive use of African troops in World War II and during the subsequent Indochina and Algerian Wars. Indian troops served in Europe in large numbers during both World Wars, as well as in the Middle East, Malaya, Burma and North Africa in World War II. The Regulares (Moorish infantry and cavalry) of Spanish Morocco played a major role in the Spanish Civil War of 1936-39. Japan recruited levies from Korea and Taiwan during the period of colonial rule in both countries. Italy employed Dubats from Italian Somaliland, together with Eritrean and Libyan units in the conquest of Ethiopia during 1936. The U.S. Army's 65th Infantry Regiment created in 1899, was made up of Puerto Ricans enlisted men and a mix of White and Puerto Rican officers. The regiment performed garrison and defense duties in Puerto Rico and the Panama Canal Zone during World War I and World War II and served with distinction during the Korean War before being transferred to the Puerto Rico National Guard in 1956. The Puerto Rico Army & Air National Guard are seen by many countries to be a contemporary form of colonial troops under the orders of the United States as at this date.

Colonial troops sometimes served as symbols or icons of Imperial power. Representative detachments of Indian or other Empire forces came to London to parade as part of coronation or other major celebrations during the late nineteenth and early twentieth centuries. French tirailleurs and spahis paraded in Paris on the 14th July each year until 1962. Until at least the 1930s, British Indian and French, Italian and Spanish North African regiments were notable for their picturesque uniforms which incorporated indigenous features such as colourful turbans, cloaks and sashes. Such features were an aid to voluntary recruiting as well as ensuring a high profile for the overseas territorites represented.

The end of the colonial empires saw mixed outcomes for colonial troops. Where the transition was a relatively peaceful one the existing colonial units were likely to form the basis of the new national armies. Where there had been extended conflict those locally recruited troops who had remained loyal to their former colonial rulers might find themselves regarded as collaborators and subject to reprisals after independence. This was particularly the case in Algeria in 1962 (see Harkis).