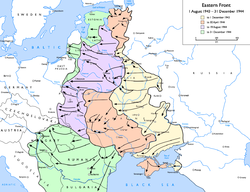 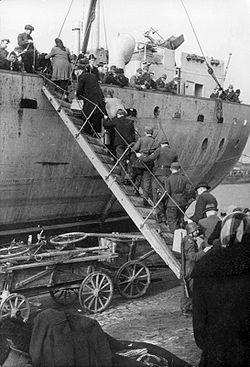 The Courland Pocket[1] referred to the Red Army's blockade or encirclement of Axis forces on the Courland peninsula during the closing months of World War II. Its commander was General Bagramyan (later Marshal Bagramyan).[citation needed]

The pocket was created during the Red Army's Baltic Strategic Offensive Operation, when forces of the 1st Baltic Front reached the Baltic Sea near Memel during its lesser Memel Offensive Operation phases. This action isolated the German Army Group North (German: Heeresgruppe Nord) from the rest of the German forces between Tukums and Liepāja in Latvia. Renamed Army Group Courland (German: Heeresgruppe Kurland) on 25 January, the Army Group remained isolated until the end of the war. When they were ordered to surrender to the Soviet command on 8 May, they were in "blackout" and did not get the official order before 10 May, two days after the capitulation of Germany. It was one of the last German groups to surrender in Europe.

Courland, along with the rest of the Baltic eastern coast and islands, was overrun by Army Group North during 1941. Army Group North spent most of the next two years attempting to take Leningrad, without success. In January 1944, the Soviet Army lifted the siege of Leningrad.

After Operation Bagration ended, the Soviets continued the clearing of the Baltic coast, despite German attempts to restore the front (Operation Doppelkopf). The Red Army fought the Memel Offensive Operation with the goal of isolating Army Group North by capturing the city of Memel (Lithuanian: Klaipėda).

Battles of the "Courland Bridgehead"

On 9 October 1944, the Soviets reached the Baltic Sea near Memel after over-running headquarters of the 3rd Panzer Army. As a result, Army Group North was cut off from a route to East Prussia. Hitler's military advisors—notably Heinz Guderian, the Chief of the German General Staff—urged evacuation and utilisation of the troops to stabilise the front in central Europe. However, Hitler refused, and ordered the German forces in Courland and the (Estonian) islands Hiiumaa and Saaremaa to hold out, believing them necessary to protect German submarine bases along the Baltic coast. Hitler still believed the war could be won, and hoped that Dönitz's new Type XXI U-boat technology could bring victory to Germany in the Battle of the Atlantic, forcing the Allies out of Western Europe. This would allow German forces to focus on the Eastern Front, using the Courland Pocket as a springboard for a new offensive.[2]

Hitler's refusal to evacuate the Army Group resulted in the entrenchment of more than 200,000 German troops largely of the 16th Army and 18th Army, in what was to become known to the Germans as the "Courland Bridgehead". Thirty-three divisions of the Army Group Centre—commanded by Ferdinand Schörner—were cut off from Prussia and spread out along a front reaching from Riga to Liepāja, retreating to the more defensible Courland position, abandoning Riga.[3]

Soviet forces launched six major offensives against the German and Latvian forces entrenched in the Courland Pocket between 15 October 1944, and 4 April 1945:|}

The German two-phase withdrawals during the execution of the second stage of the Soviet Baltic Offensive (14 September-24 November 1944), subsequent to the pocket being formed in the Baltic Offensive's first stage, the Memel Offensive Operation:

The Soviet 2nd Baltic (northern sector) and 1st Baltic Fronts (southern sector) commenced a blockade, precipitating the German defence of the Courland perimeter during Soviet attempts to reduce it. Serving with the 2nd Baltic Front's 22nd Army was the Latvian 130th Rifle Corps that included two rifle divisions in which served a large number of Latvians in their ranks who would soon be facing their opposites in the Latvian 19th SS Division.

On 8 May, Germany's Head of State (Staatsoberhaupt) and President (Reichspräsident) Karl Dönitz ordered Colonel-General Carl Hilpert—the Army Group's last commander—to surrender. Hilpert, his personal staff, and staffs of three Armies surrendered to Marshal Leonid Govorov, the commander of the Leningrad Front. At this time, the group still consisted of the remnants of 27 divisions and one brigade.[6]

On 8 May, General Rauser succeeded in obtaining better surrender terms from the Soviet command.[7] On 9 May, the Soviet commission in Peilei started to interrogate the captive staff of Army Group Courland, and general collection of prisoners begun.

Western and Soviet historiography differ greatly with respect to the character of the fighting in Courland and to the strategic intent of Soviet forces.

The Soviet account states that Army Group Courland was blockaded, as the theater was of little strategic importance after the isolation of Army Group North, and the main offensive effort was required for the Vistula-Oder and Berlin Offensives, with correspondingly low casualty figures (these agree with the modern research of Grigoriy Krivosheev,[8] which accounts for 30,501 "irrecoverable" and 130,447 "medical" losses, for a total of 160,948 Soviet casualties between 16 February and 8 May). In this account, the Soviet actions in Courland were defensive blockading operations. Hostilities consisted of containing German breakout attempts, and the Red Army made no concerted effort to capture the Courland Pocket.

According to the Latvijas Enciklopēdija (Latvian Encyclopedia) by Arveds Švābe the Soviet command attached great importance to the capture of Courland, which held special significance for the Latvians as it was the beachhead from which they had retaken their territory from the Bolsheviks after World War I.[4] Soviet forces launched six major offensives to defeat the German Army Group Courland.[4] Throughout the campaign against the Courland pocket, and despite tremendous losses incurred, Soviet forces did not advance more than 25 miles anywhere along the front, ending no more than a few miles forward of their original positions.[3]

Stalin ordered repeated attacks into the Courland cauldron, disregarding heavy losses.[3] According to a communiqué from the German Courland command of 16 March,[4] the Soviet army lost 320,000 soldiers (fallen, wounded, and taken prisoner), 2,388 tanks, 659 planes, 900 artillery pieces, and 1,440 machine-guns through the first five battles for Courland.[4] The Soviets are estimated to have lost an additional 74,000 with 553 taken prisoner in the sixth and last battle,[4] as waves of tens of thousands of Soviet attackers were slaughtered at Liepāja[3]—a total of more than 390,000 Soviet troops killed, wounded, or taken prisoner according to the Germans.[3]

After 9 May 1945, according to Russian records, 146,000 German and Latvian troops were taken prisoner, including 28 generals and 5,083 high-ranking officers,[4] and taken to camps in the USSR interior and imprisoned for years.[3] The Soviets detained all males between the ages of 16 and 60, and conducted widespread deforestation campaigns, burning vast tracts of forest, to flush out resisters.[4] More recent scholarship puts the number of German soldiers who surrendered at 181,000 including their commander Generaloberst Hilpert.[3] On 9 May 1945, General Hovhannes Bagramyan accepted the surrender of the German forces penned up in Latvia.[3]

Members of the Latvian Legion who surrendered along with the Germans or were captured were treated as traitors under the pretext that Latvia was part of the Soviet Union and summarily executed.[3] Some of those who escaped continued fighting the Soviets as Forest Brothers.[3]