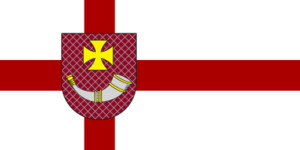 Ventspils (IPA2|ventspi:ls, audio|Ventspilspronunc.ogg|pronunciation; _de. Windau) is a in northwestern on the coast of the . It is named after the , which passes through the city. Ventspils had a population of 43,806 in 2006.

Ventspils developed from a castle of the and was first mentioned in chronicles in 1290. It was chartered in 1314 and became an important mercantile city of the .

Ventspils is an important . Large amounts of oil and other mineral resources from are loaded aboard ships at Ventspils. The revenue from port services has made Ventspils the wealthiest city in Latvia.

Thirty kilometres north of Ventspils is the ex-Soviet installation VIRAC ("Ventspils Starptautiskais Radioastronomijas Centrs" or "Ventspils International Radio Astronomy Centre"). The existence of the "Centrs" was unknown to most Latvians until the withdrawal of the Soviets at the end of occupation in 1994.

The city has a university college, "Ventspils Augstskola", and a team that has won the Latvian championship in the last several years. In the 2001/2002 season, the team took third place in the North European League (NEBL). Ventspils also has a football team in who compete in the . In the 2006 season the team has won the Latvian championship for the first time.

, one of the three international airports in Latvia, is located in the city. provides infrastructure and services to IT and electronics companies.

In 2004 Ventspils was a host city for a multi-national (United States, United Kingdom, Poland, Sweden, Russia, Latvia, Denmark, Finland, Norway) naval exercise called Baltic Operations XXXIII (BALTOPS). The force was led by the USS "Anzio and the destroyer (DDG-67). The US vessels were the first American warships to visit the port of Ventspils since Latvian independence was declared.