In optics, a Gaussian beam is a beam of electromagnetic radiation whose transverse electric field and intensity (irradiance) distributions are well approximated by Gaussian functions. Many lasers emit beams that approximate a Gaussian profile, in which case the laser is said to be operating on the fundamental transverse mode, or "TEM00 mode" of the laser's optical resonator. When refracted by a lens, a Gaussian beam is transformed into another Gaussian beam (characterized by a different set of parameters), which explains why it is a convenient, widespread model in laser optics.

Instantaneous intensity of a Gaussian beam. 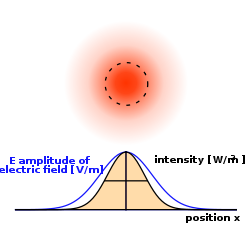 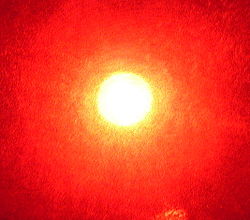 Light from a 630 nm laser pointer.

The mathematical function that describes the Gaussian beam is a solution to the paraxial form of the Helmholtz equation. The solution, in the form of a Gaussian function, represents the complex amplitude of the beam's electric field. The electric field and magnetic field together propagate as an electromagnetic wave. A description of just one of the two fields is sufficient to describe the properties of the beam.

For a Gaussian beam, the complex electric field amplitude is given by

is the wave number (in radians per meter),
E0 = | E(0,0) | ,
w(z) is the radius at which the field amplitude and intensity drop to 1/e and 1/e2 of their axial values, respectively,
w0 = w(0) is the waist size,
R(z) is the radius of curvature of the beam's wavefronts, and
ζ(z) is the Gouy phase shift, an extra contribution to the phase that is seen in Gaussian beams.

The corresponding time-averaged intensity (or irradiance) distribution is

where I0 = I(0,0) is the intensity at the center of the beam at its waist. The constant

is the characteristic impedance of the medium in which the beam is propagating. For free space,

The geometry and behavior of a Gaussian beam are governed by a set of beam parameters, which are defined in the following sections.

where the origin of the z-axis is defined, without loss of generality, to coincide with the beam waist, and where

is called the Rayleigh range.

At a distance from the waist equal to the Rayleigh range zR, the width w of the beam is

The distance between these two points is called the confocal parameter or depth of focus of the beam:

R(z) is the radius of curvature of the wavefronts comprising the beam. Its value as a function of position is

The parameter w(z) approaches a straight line for

. The angle between this straight line and the central axis of the beam is called the divergence of the beam. It is given by

Because of this property, a Gaussian laser beam that is focused to a small spot spreads out rapidly as it propagates away from that spot. To keep a laser beam very well collimated, it must have a large diameter. This relationship between beam width and divergence is due to diffraction. Non-Gaussian beams also exhibit this effect, but a Gaussian beam is a special case where the product of width and divergence is the smallest possible.

Since the gaussian beam model uses the paraxial approximation, it fails when wavefronts are tilted by more than about 30° from the direction of propagation.[1] From the above expression for divergence, this means the Gaussian beam model is valid only for beams with waists larger than about 2λ/π.

Laser beam quality is quantified by the beam parameter product (BPP). For a Gaussian beam, the BPP is the product of the beam's divergence and waist size w0. The BPP of a real beam is obtained by measuring the beam's minimum diameter and far-field divergence, and taking their product. The ratio of the BPP of the real beam to that of an ideal Gaussian beam at the same wavelength is known as M2 ("M squared"). The M2 for a Gaussian beam is one. All real laser beams have M2 values greater than one, although very high quality beams can have values very close to one.

The longitudinal phase delay or Gouy phase of the beam is

This phase shifts by π as the beam passes through the focus, in addition to the normal change in phase as the beam propagates.

The complex beam parameter is

It is often convenient to calculate this quantity in terms of its reciprocal:

In terms of the complex beam parameter q, a Gaussian field with one transverse dimension is proportional to

Power through an aperture

is the total power transmitted by the beam.

For a circle of radius

, the fraction of power transmitted through the circle is

Similarly, about 95 percent of the beam's power will flow through a circle of radius

The peak intensity at an axial distance z from the beam waist is calculated using L'Hôpital's rule as the limit of the enclosed power within a circle of radius r, divided by the area of the circle πr2:

The peak intensity is thus exactly twice the average intensity, obtained by dividing the total power by the area within the radius w(z). 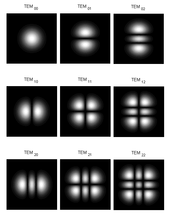 Gaussian beams are just one possible solution to the paraxial wave equation. Various other sets of orthogonal solutions are used for modelling laser beams. In the general case, if a complete basis set of solutions is chosen, any real laser beam can be described as a superposition of solutions from this set. The design of the laser determines which basis set of solutions is most useful. In some cases the output of a laser may closely approximate a single higher-order mode. Hermite-Gaussian modes are particularly common, since many laser systems have Cartesian reflection symmetry in the plane perpendicular to the beam's propagation direction.

Hermite-Gaussian modes are a convenient description for the output of lasers whose cavity design is not radially symmetric, but rather has a distinction between horizontal and vertical. In terms of the previously defined complex q parameter, the intensity distribution in the x-plane is proportional to

where the function Hn(x) is the Hermite polynomial of order n (physicists' form, i.e.

), and the asterisk indicates complex conjugation. For the case n = 0 the equation yields a Gaussian transverse distribution.

For two-dimensional rectangular coordinates one constructs a function um,n(x,y,z) = um(x,z)un(y,z), where un(y,z) has the same form as um(x,z). Mathematically this property is due to the separation of variables applied to the paraxial Helmholtz equation for Cartesian coordinates.[3]

Hermite-Gaussian modes are typically designated "TEMm,n", where m and n are the polynomial indices in the x and y directions. A Gaussian beam is thus TEM0,0.

If the problem is cylindrically symmetric, the natural solution of the paraxial wave equation are Laguerre-Gaussian modes. They are written in cylindrical coordinates using Laguerre polynomials

are the generalized Laguerre polynomials, the radial index

and the azimuthal index is l.

In elliptic coordinates, one can write the higher-order modes using Ince polynomials. The even and odd Ince-Gaussian modes are given by [4]

are the even Ince polynomials of order p and degree m, ε is the ellipticity parameter, and

There is another important class of paraxial wave modes in the polar coordinates in which its complex amplitude is proportional to confluent Hypergeometric function. These modes have a singular phase profile and are eigenfunctions of the photon orbital angular momentum. The intensity profile is characterized by a single brilliant ring with the singularity at its center, where the field amplitude vanishes [5]

where m is integer,

is real valued, Γ(x) is the gamma function and 1F1(a,b;x) is a confluent hypergeometric function. Some subfamilies of the Hypergeometric-Gaussian (HyGG) modes can be listed as the modified Bessel Gaussian modes, the modified exponential Gaussian modes, and the modified Laguerre–Gaussian modes. However, the HyGG is overcomplete and it is not orthogonal set of modes. In spite of its complicated field profile, HyGG modes have a very simple profile at the pupil plane (see optical vortex):

where it explains that out coming wave from pitch-fork hologram is a sub family of HyGG modes. The HyGG profile while beam propagates along ζ has a dramatic change and it is not stable mode below the Rayleigh range.