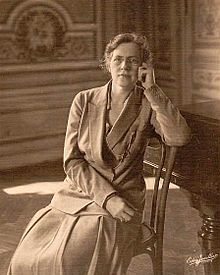 (Juliette) Nadia Boulanger ([ʒy.ljɛt na.dja bu.lɑ̃.ʒe]; 16 September 1887 – 22 October 1979) was a French composer, conductor and teacher who taught many composers and performers of the 20th century.

From a musical family, she achieved early honours as a student at the Paris Conservatoire, but believing that her talent as a composer was inferior to that of her younger sister Lili, she gave up composing and became a teacher. In that capacity she influenced generations of young composers, including many from the U.S., beginning with Aaron Copland. Among her other students were those who became leading soloists and conductors, including Dinu Lipatti, Igor Markevitch and Ástor Piazzolla.

Boulanger taught in the U.S. and in England, working with music academies including the Juilliard School, the Yehudi Menuhin School, the Longy School, the Royal College of Music and the Royal Academy of Music, but her principal base for most of her life was her family's flat in Paris, where she taught for most of the seven decades from the start of her career until her death at the age of 92.

Boulanger was the first woman to conduct many major orchestras in America and Europe, including the BBC Symphony, Boston Symphony, Hallé, New York Philharmonic and Philadelphia orchestras. She conducted several world premieres, including works by Copland and Stravinsky.

Boulanger was born to a musical family. Her grandmother, Marie-Julie Boulanger, was a celebrated singer at the Opéra Comique. Her grandfather, Frédéric Boulanger, won first prize for the cello in his fifth year (1797) at the recently founded Paris Conservatoire. Her father, Ernest Boulanger (1815–1900), entered the Conservatoire at the age of 16, studying piano, violin, and composition. In 1835, he won the Conservatoire's top prize, the Prix de Rome, for a one-act opera, Le Diable à l'École (The Devil at School). He later taught singing at the Conservatoire. In 1874, while he was performing in Russia, he met a young, married Russian schoolteacher, Raissa Suvalov (née Myschetsky). She moved to Paris to attend his singing class at the Conservatoire, and in 1877 they married; she was aged 20 and he 62. Their first child, Juliette Nadia Boulanger was born in Paris ten years later.[1] By her sixth birthday, she was studying music under her mother's tutelage. A second child, Lili, was born in 1893. The ageing father asked Nadia to promise to look after the newborn girl for the rest of her life.[1]

Boulanger entered the Conservatoire at the age of 10, studying harmony with Paul Vidal and composition with Charles Marie Widor and Gabriel Fauré; she also studied the organ privately with Louis Vierne and Félix-Alexandre Guilmant.[2] While still a student at the Conservatoire, she became the family's only breadwinner on the death of her father in 1900. She began taking engagements as a pianist, and teaching private students in the family's new flat in the rue Ballu, where she continued to live and teach until her death more than 75 years later. Among her early pupils was her younger sister, Lili, who studied counterpoint with her. In 1906, Boulanger became Fauré's assistant at the great organ of the Église de la Madeleine. She remained a lifelong devotee of his music and later introduced his Requiem to several cities in Britain and the U.S.[1] 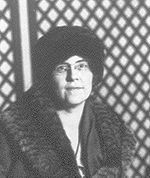 After winning the Conservatoire's top prizes for harmony, counterpoint, fugue, organ and piano accompaniment,[3] Boulanger came to wider public attention in 1908, when, in a preliminary round for the Prix de Rome, she submitted a fugue for string quartet, rather than for voices as specified, causing a stir in musical circles. Despite objections from at least one examiner,[4] she was allowed to progress to the final round, and was placed second with her cantata La sirène.[2] She failed to win the Premier Grand Prix the following year also, even though on both occasions she was generally acknowledged to have written the best cantata.[5] Her younger sister Lili, who was, as Boulanger acknowledged, the more talented composer, won the Premier Grand Prix de Rome in 1913, the first woman composer to do so. By that time, Nadia was firmly established as a teacher, and had little time to compose.[6]

Nadia Boulanger's compositions, published between 1901 and 1922, comprise 29 songs for solo singer and piano; nine larger-scale vocal works, some with orchestra; five works for instrumental solo (organ, cello, piano); two orchestral works, and an opera, La ville morte, and a song cycle, Les heures claires, both composed jointly with Raoul Pugno, for whom she composed a Fantaisie variée for piano and orchestra. The opera was due to be staged in 1914, but owing to Pugno's death and events leading up to World War I, it was never performed. A complete vocal score and the orchestration of Acts 1 and 3 survive. The Grove Dictionary of Music and Musicians says of Boulanger's music, "Her musical language is often highly chromatic (though always tonally based), and Debussy's influence is apparent … her self-critical attitude (the Fantaisie variée bears signs of extensive revision and is not performable in its present state) led her to concentrate on teaching."[2] Most of her compositions date from before her younger sister's triumph at the Prix de Rome. Lili had never been healthy, and in 1918 she died. After Lili's death, Nadia abandoned composition, publishing only a few songs in 1922, and then nothing more.[2] Fauré believed she was mistaken to stop composing,[7] but she told told him, "If there is one thing of which I am certain, it is that my music is worthless."[8]

Boulanger, who liked to be known as "Mademoiselle",[9] made her conducting debut in 1912. She was the first woman to conduct several major symphony orchestras, including the New York Philharmonic, the Boston Symphony Orchestra, the Philadelphia Orchestra, and in England the Hallé Orchestra of Manchester and the BBC Symphony Orchestra. On her first American tour she premiered Aaron Copland's "Symphony for Organ and Orchestra."[6] 1937 she became the first woman to conduct a complete concert of the Royal Philharmonic Society in London. In 1938 she directed the first performance of Stravinsky’s Concerto, Dumbarton Oaks in Washington DC.[2]

As a performer she made few recordings. In 1937 HMV issued three sets of discs featuring her: the Piano Concerto in D by Jean Françaix, which she conducted; the Brahms Liebeslieder Waltzes, in which she and Dinu Lipatti were the duo pianists with a vocal ensemble; and the first recordings of any music by Monteverdi: a selection of his madrigals, which she directed.[10]

The composer Ned Rorem described Boulanger as "the most influential teacher since Socrates."[1] She taught a very large number of students from Europe, Australia, and Canada, as well as over 600 American musicians. However, neither she nor Annette Dieudonné, her life-long friend and assistant, kept records of the students who studied with her. It is, moreover, virtually impossible to determine the nature and extent of many musicians' private study with Boulanger, ranging from prolonged and intensive tuition to brief, informal advice.

Boulanger's first teaching position was at the Conservatoire Femina-Musica in Paris in 1907. Later, she was one of the first staff members at Alfred Cortot's École Normale de Musique de Paris, beginning in 1920, where she taught a large variety of subjects.[2] She was disappointed at not winning an appointment to the faculty of the Conservatoire, but in 1921 she was invited to join the first faculty of the Conservatoire Américain at Fontainebleau. This was a summer school, sponsored by American donors, at which Boulanger taught harmony, counterpoint, and composition under the directorship of Paul Dukas. Among her first pupils there was Aaron Copland, who was followed by many other young American composers. Some of her students, including Copland, Quincy Jones, Denoe Leedy, Walter Piston, George Peter Tingley, Roy Harris, Virgil Thomson, Louise Talma, Michel Legrand,Charles Fox, Joe Raposo, Astor Piazzolla, Philip Glass, Russell Woollen, Robert Shafer, and Elliott Carter established a new school of composition based on her teaching. Virgil Thompson once said that every town in the United States had a five-and-dime and a Boulanger pupil.[11] Boulanger eventually became director of the Conservatoire Américain in 1948. She also taught at the Longy School of Music and the Paris Conservatoire. She lived in the U.S. during World War II and taught at Wellesley College, Radcliffe College, and the Juilliard School.[6]

Boulanger's European students included Igor Markevitch, Jean Françaix, Francis Chagrin,[12] Lennox Berkeley, and Donald Covert. In England she taught at the Yehudi Menuhin School, and gave lectures on a wide range of music topics at the Royal College of Music and the Royal Academy of Music which were broadcast nationally by the BBC. She also served on the juries of international piano competitions including, in 1966, the International Tchaikovsky Competition in Moscow, chaired by Emil Gilels.[6]

Boulanger's teaching methods included traditional harmony, score reading at the piano, species counterpoint, analysis, and sight singing (using fixed-Do solfège). She disapproved of innovation for innovation's sake: "When you are writing music of your own, never strain to avoid the obvious."[7] "You need an established language and then, within that established language, the liberty to be yourself. It's always necessary to be yourself – that is a mark of genius in itself."[13]

Even though her eyesight and hearing began to fade towards the end of her life, Boulanger worked almost until her death in 1979.[2]