New York State Route 70 (NY 70) is a short state highway in the western portion of New York in the United States. It travels through three different counties in just 18.01 miles (28.98 km) and is the primary road to and from the village of Canaseraga. The northern terminus of the route is at an intersection with NY 436 in the Livingston County town of Portage. Its southern terminus is at a junction with NY 36 in the Steuben County town of Dansville. Although NY 70 is signed north–south, it follows a more southeast–northwest alignment and is considered an east–west route by the New York State Department of Transportation (NYSDOT). The portion of the route between Dalton and Canaseraga parallels both Canaseraga Creek and the Norfolk Southern Railway's Southern Tier Line.

When the route was assigned as part of the 1930 renumbering of state highways in New York, it continued southeast from Canaseraga to Avoca by way of modern NY 961F and Steuben County's County Route 70A (CR 70A). Additionally, it briefly extended west from Garwoods to Old State Road in Granger. The route was cut back to Garwoods ca. 1939 and to Arkport ca. 1974. By 1977, NY 70 was reconfigured to extend from Portage to a junction east of Canaseraga, replacing part of NY 408 and all of New York State Route 70A and New York State Route 351. Reference markers for all three routes are still posted along NY 70.

NY 70 is posted as a north–south highway; however, it is inventoried by NYSDOT as an east–west route,[2] reflecting the route's more east–west than north–south alignment.[3] As such, the route officially begins at an intersection with NY 436 in the town of Portage, located in southwestern Livingston County.[2] It initially heads southward across open fields and past small wooded areas before curving to the east about 1 mile (1.6 km) later. The route continues in this direction for another 2 miles (3.2 km) to the town of Nunda and the hamlet of Dalton, where it connects to the southern terminus of NY 408.[3]

From Dalton southeast to Canaseraga, NY 70 closely parallels the Norfolk Southern Railway's Southern Tier Line as both the road and the rail line run along the base of a valley surrounding Canaseraga Creek, the source of which is located roughly 3 miles (5 km) east of Dalton. The valley takes the route and the railroad southeastward into Allegany County, where they both pass through the railside hamlets of Swain (in the town of Grove) and Garwoods (Burns). East of Garwoods, the creek curves to follow a more easterly track, and the valley, NY 70, and the Southern Tier Line all turn to match. Just over 2 miles (3.2 km) from Garwoods is the creekside village of Canaseraga, a stark departure from the isolated, undeveloped areas that NY 70 serves west of this point.[3]

The open areas return east of the community, where it intersects NY 961F, a rare signed reference route. At this point, the Southern Tier Line heads south to follow NY 961F toward Hornell and Canaseraga Creek turns north toward the Livingston County village of Dansville; however, NY 70 continues eastward toward the Steuben County line. Past NY 961F, NY 70 initially heads generally eastward across a wide north–south gully that carries NY 36 from Hornell to Dansville. About 1 mile (1.6 km) from the reference route, NY 70 turns sharply to the northeast, following this alignment into Steuben County and its town of Dansville.[3] The route ends just 0.24 miles (0.4 km) into the county at an intersection with NY 36 near the eastern edge of the valley.[2] 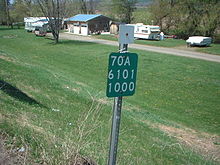 In the 1930 renumbering of state highways in New York, NY 70 was assigned to an alignment extending from NY 63 (now Old State Road) in Granger to NY 2 (now NY 415) south of Avoca via the Grove hamlet of Garwoods, Canaseraga, Arkport, and Hornell. From Garwoods to Canaseraga, NY 70 followed its modern routing;[1] east of Canaseraga, NY 70 used modern NY 961F, NY 36, and Big Creek Road (Steuben County's CR 70A).[4] West of Garwoods, NY 70 followed Ames Nichols and Swain Roads to Spencer Worden Road, from where the route was to continue west to NY 63 by way of an extension of Swain Road.[5] The portion of NY 70 between Garwoods and Avoca was previously part of NY 38 from the mid-1920s[6][7] to the 1930 renumbering.[1]

NY 70 remained unchanged until the 1970s when the route was reconfigured into its modern alignment through a series of changes. Ca. 1974, NY 70 was truncated westward to Arkport following the completion of the Southern Tier Expressway between Hornell and Avoca.[15][16] By 1977, NY 408 was truncated truncated to Dalton on its southern end. The Dalton–Garwoods segment of NY 408's former routing and all of NY 351 became a western extension of NY 70. The route was also realigned on its east end by this time to follow the routing of NY 70A east of Canaseraga.[17] Reference markers for NY 70A, NY 351, and NY 408 still exist on the sections of NY 70 that once carried those designations.[2]