Coat of arms of Argentina

Coat of arms of Argentina

The coat of arms of Argentina[1] (Spanish: Escudo de la República Argentina) was established in its current form in 1944, but has its origins in the seal of the General Constituent Assembly of 1813, though there is no known decree or any other type of order or authorisation ordering its specific use. It is supposed, however, that this symbol was chosen quickly because of the existence of a decree signed on February 22, sealed with that seal. The first mention of it in a public document dates to March 12 of that same year, in which it is stated that this seal had to be used by the executive power, that is, the second triumvirate. On April 13 the National Assembly coined the new silver and gold coins, each with the seal of the Assembly on the reverse, in that way what started as a seal became a national coat of arms. On April 27 the coat of arms became a national emblem. The decree states also that the coat of arms should not be used in flags, though Belgrano ordered to paint the coat of arms over the flag he gave to the city of Jujuy. Moreover, during the Argentine War of Independence, most flags had the coat of arms. 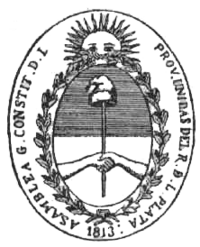 Seal of the General Constituent Assembly of 1813. 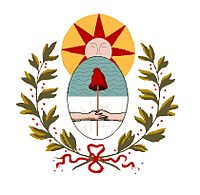 Seal of a French group in the National Assembly, around 1793.

It is still unknown who designed the coat of arms. It is often mentioned that there were three men: Alvear, Monteagudo and Vieytes, but it is known that a few years before, President Bernardino Rivadavia asked the Peruvian Antonio Isidoro Castro to create an Argentine coat of arms; however, the two schemes were never found.

The coat of arms is a figure, in which we find the following symbols: At the top is the famous sun symbol of Argentina, the gold-yellowed Sun of May, also found on the flag of Argentina. The rising sun symbolizes the rising of Argentina, as described in the first version of the Argentine National Anthem: Se levanta a la faz de la tierra una nueva y gloriosa nación, meaning "a new and glorious nation rises to the surface of the Earth". It must be noticed how the verb "rise" (and so in Spanish) can be used to describe the motion of the Sun.

In the center ellipse are two shaking hands that symbolize the unity of the various provinces of Argentina. The hands come together to hold a pike, which represents power and the willingness to defend the freedom that is symbolized by the Phrygian cap (or liberty cap) on the top of the pike. The blue and white colors are symbols of the Argentine people, and are the same colors of the Argentine flag. The blue half of the ellipse represents the sky, and the white one represents the Río de la Plata. The hands are flesh coloured and represent friendship, peace, union and brotherhood; the pike is brown (it is a wooden pike), and the Phrygian cap is red, like the traditional French cap. The proximity of the hands and the Phrygian cap, in addition to have individual meanings, represent the national motto of Argentina: En unión y libertad, that means "in unity and freedom"; and represent the fact that in unity (the hands) there is power (the pike), and in power (the pike) there is freedom (the Phrygian cap). The Phrygian cap was typically worn by the inhabitants of Phrygia, in the Anatolian peninsula, but in ancient Rome it became a symbol of slaves that gained freedom, and those same slaves were touched by their owners with a wooden pike before setting them free. Laurel is another classical symbol. At the end of the Olympic Games, the winner was given a laurel crown, and since then it has symbolized triumph and glory.