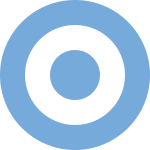 The Argentine Cockade is one of the national symbols of Argentina, instituted by decree on February 18, 1812 by the First Triumvirate, who determined that "The national cockade of the Provincias Unidas del Río de la Plata shall be of colours white and light blue [...]".

The National Cockade Day was established on May 18, 1935, the date on which supposedly a cockade was first used by the dames of the city of Buenos Aires during the events of the May Revolution of 1810.[1]

The origin of the colours of the cockade, and the reasons for the election, cannot be exactly established. Among the several versions, one states that the colours white and light-blue where first adopted during the British invasions of the Río de la Plata in 1806-1807 by the Patricians Regiment, first regiment of the urban military of the Río de la Plata. Supposedly a group of ladies from Buenos Aires first wore the cockade on May 19, 1810, in a visit to Cornelio Saavedra, Chief of the Patricios.

Between the 22nd and 25th of May 1810, it is known that the "chisperos", or patriots, identified the adherents to the May Revolution by giving them ribbons with those colours. An anonymous manuscript quoted by historian Marfany express that on Monday 21, 1810 the patriots identified the revolutionaries with white ribbons on their clothes and hats. In Juan Manuel Beruti's memoirs, Memorias Curiosas, it is commented on the use of the white ribbons on the clothes and both a cockade and an olive tree branch on the hat.

It was also documented by Spanish functionary Faustino Ansay that when news of the movement arrived to Mendoza, the supporters of the revolution started wearing white stripes.

A report attributed to Ramón Manuel de Pazos says that on May 21, 1810, Domingo French and Antonio Beruti distributed white ribbons as a sign of peace and unity between the patriots and the supporters of the Spanish government, but given the hostility of the later, on May 25 they started distributing red stripes with the Jacobin sign. Both colours were adopted by the Cabildo of Tarija that joined the May Revolution.

A version by Bartolomé Mitre affirmed that French "entered in one of the shops of the Recova and took several tracks of white and light blue stripes. [he] Also put pickets with orders of letting in only the patriots, and make them put the distinctive [stripes]", though his statement might be biased by the fact that the blue was one of the colours of the party he was a member, and which would be later known as the Unitarian Party. Its perhaps from Mitre's words that the popular belief that attributes French and Beruti the creation of the Argentine cockade.[2]. In any case, it is known that on March 1811, the Patriotic Society created by people from Mariano Moreno's circle, wore the white and light-blue colours ribbons.

In a note dated on February 13, 1812, Manuel Belgrano solicited the Triumvirate the use of the white and light-blue national cockade, having to omit the red colour since the Spanish troops and the royalists had been using it as a distinctive colour against the revolution. Popular legend says Belgrano was inspired by the colour of the sky and the clouds to choose such colours, but probably he took them from the already distinctive ribbons and cockade that were being used.[2].

On February 18 of 1812, the government decided to create the National Cockade of the United Provinces of the River Plate with light-blue at its outer border and centre, and white between both.

Belgrano then used the same colours to design the national flag, to which his men first took oath on February 27. That day the Triumvirate ordered Belgrano to take the Northern Army (Ejército del Norte), who departed immediately, unaware that the government would then reject the new flag.[3]