Khlysts
This article is about the Russian religious sect. For the American doom metal band, see Khlyst (band).

Khlysts or Khlysty (Хлысты in Russian) was an underground sect from late 17th to early 20th century that split off the Russian Orthodox Church and belonged to the Spiritual Christians (духовные христиане) tendency. 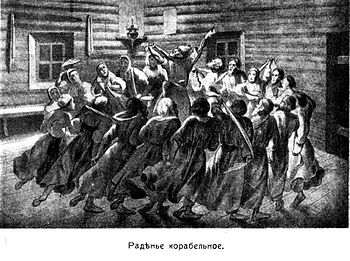 'Khlyst', the name commonly applied to them, is a distortion of the name they used; the original name was the invented word Христововеры (Khristovovery, "Christ-believers") or Христы (Khristy); their critics corrupted the name, mixing it with the word хлыст (khlyst), meaning "a whip". It is also possible that the word 'Khlysty' is related to the Greek word 'χιλιασταί' (=millennialists), pronounced 'khiliasté', or with "klyster", meaning "one that purges". Millennialism has many different branches and sects and their teachings have common points with those of the Khlysty.

It is said to have been founded by a peasant, Daniil Filippovich,[1] (or Filippov), of Kostroma. The Khlysty renounced priesthood, holy books and veneration of the saints (excluding the Theotokos). They believed in a possibility of direct communication with the Holy Spirit and of His embodiment in living people. Curiously enough, they allowed their members to attend Orthodox churches. The central idea of Khlystys' ideology was to practice asceticism. Khlysty practiced the attainment of divine grace for sin in ecstatic rituals (called радéния, or radeniya) that were rumored to sometimes turn into sexual orgies.[1] Flagellation was also rumored, possibly due to the similarity of their name to the word for "whip".[1]

Secret Khlysty cells existed throughout pre-revolutionary Russia (with approximately 40,000 followers in total); they were most common in the factories of the Perm district. Each cell was normally led by a male and a female leader, who were called the "Christ" and the "Mother of God" respectively. The cells themselves were referred to as 'Arks' among members and messages were carried between them clandestinely in order to facilitate communication. They were often subject to persecution and perceived as a subversive element by the nineteenth century Russian authorities and ecclesiastical bodies.[1]

The number of cells dropped drastically in the Soviet times. However, a few secluded Khlysty communities existed in Soviet Russia in Tambov, Kuibyshev, Orenburg and Northern Caucasus and in Soviet Ukraine.