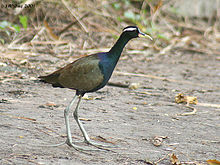 The Bronze-winged Jacana, Metopidius indicus, is a jacana. It is the only member of the genus Metopidius. The jacanas are a group of waders in the family Charadriidae, which are identifiable by their huge feet and claws which enable them to walk on floating vegetation in the shallow lakes that are their preferred habitat. They are found worldwide within the tropical zone.

The Bronze-winged Jacana breeds in India and southeast Asia. It is sedentary apart from seasonal dispersion. It lays four black-marked brown eggs in a floating nest. The males, as in some other wader families like the phalaropes, take responsibility for incubation. 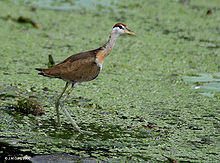 These are conspicuous and unmistakable birds. They are 29 cm (11 in) long, but the females are larger than the males. They are mainly black, although the inner wings are very dark brown and the tail is red. There is a striking white eyestripe. The yellow bill extends up as a red coot-like head shield, and the legs and very long toes are grey.

Young birds have brown upperparts. Their underparts are white, with a buff foreneck.

The Bronze-winged Jacana's feeds on insects and other invertebrates picked from the floating vegetation or the water's surface.

Call is a wheezy piping seek-seek-seek given mostly in alarm.

When forced they sometimes choose to hide by submerging themselves. The male may carry chicks between the wings and body.

Jacana is one Linnæus' pseudo-Latin misspelling for the Brazilian Portuguese Jaçanã (from a Tupi name of the same bird) whose pronunciation is approximately [ža.sa.náN].

See also Ciconiiformes, as the influential Sibley-Ahlquist taxonomy considers the Jacana to be in this order