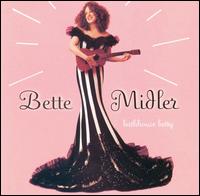 
"Bathhouse Betty" is the ninth studio album by the American singer , released in 1998. "Bathhouse Betty" was Midler's debut album for , after having parted ways with in 1995 following the moderate commercial success of her album "".

The title of the album, "Bathouse Betty", refers to Midler's early career when she performed her cabaret shows at s like the in New York which led to her becoming a with a loyal following ever since. When Midler promoted the album she said in an interview "Despite the way things turned out [with the AIDS crisis] , I'm still proud of those days [when I got my start singing at the gay bathhouses] . I feel like I was at the forefront of the gay liberation movement, and I hope I did my part to help it move forward. So, I kind of wear the label of 'Bathhouse Betty' with pride." . [cite news
title =Bette Midler
publisher =Houston Voice
date =
url =http://www.houstonvoice.com
accessdate = ]

Released some twenty-five years after Midler's breakthrough with the album "", "Bathhouse Betty" was musically a comeback and a return to her roots and her "Mae-West-meets-the-Andrews-Sisters" stage persona of the same name. The first single "I'm Beautiful (Damnit!)" - in fact not an original but a remake of a song by group - even opens with the spoken line "Hi! This is the Divine Miss M and I'm here to tell you about my cosmic fabulosity!" and effectively set the tone for the following album.

"", a tribute to Midler's native which she had first performed live in the 1997 TV special "", is a an old written by and , published in 1925 and first made famous by - and later covered by among others . Other cover versions on "Bathhouse Betty" include early girl group classics like ' debut single "I Sold My Heart to the Junkman" and 1950's R&B 's "One Monkey Don't Stop No Show", the latter featuring swing-rock band . Contemporary covers include ' tragicomic "Boxing", an imagined monologue by , originally featured on 's 1995 self-titled debut album, 's "I'm Hip" and and 's "Laughing Matters", taken from Howard Crabtree's 1996 gay musical revue "When Pigs Fly". "Big Socks", an original written and produced by , is a tongue-in-cheek contemporary R&B track whose lyrics debate the supposed correlation between the size of men's feet and other bodyparts; "Don't brag about your body, baby, and say that you're packin' a lot, 'cause all I see besides your big feet is that you got big socks."

"Baththouse Betty" was not all campiness and laughs however, the album opens with the ballad "Song of Bernadette" written by , Bill Elliott and , and first recorded by Warnes on her 1987 album "Famous Blue Raincoat". The title and the lyrics of the song refer to , a young French girl in the mid 19th century who claimed to have seen the on several occasions. Bernadette was subsequently declared insane by the villagers of - but d by the and proclaimed after her death. "Lullaby in Blue", which Midler described as her personal favourite on the album, was co-written by Leonard Cohen's son Adam and is a song about a woman who gave up a child for adoption: "I've never heard a pop song about a person who gives their child up and is missing the child... The first time I heard that song, I burst into tears." [cite journal| last = Newman| first =Melinda | authorlink = | title = Midler makes Warner Bros. debut with 'Bathhouse Betty'| journal = Billboard| volume = 110| issue = 36| pages = 15–16| publisher = | location = | date = 1998-09-05| url = | doi = | id = | accessdate = ] The second single released from the album was the melancholy "My One True Friend", composed by , and and the lead song from the movie "" which starred and .

One track from the "Bathhouse Betty" sessions, 's "Heaven", was only released as a single B-side and featured as a bonus track on the Japanese edition of the album. Gold had previously written Midler's 1990 hit single "".

"Bathhouse Betty" reached #32 on 's album chart and the lead single "I'm Beautiful", which featured dance remixes by among others , and composer Brinsley Evans himself, was a major dancefloor hit, becoming a #1 on the chart and #8 on Hot Dance Music/Maxi Singles Sales. "My One True Friend" also reached #16 on the chart.