The Institute of Cetacean Research: (ICR, 日本鯨類研究所, Nihon Geirui Kenkyūjo?) is a Japanese government-sponsored institution.[1] It took over from the Whale Research Institute (founded in 1947), which grew out of the Nakabe Scientific Research Centre (founded in 1941).[2]

The Whales Research Institute conducted research based on catches from commercial whaling. After the International Whaling Commission (IWC) moratorium on commercial whaling, the ICR was established to continue the scientific research.[2]

Many environmental groups as well as some governments (Australia in particular) dismiss the Japanese research as "a disguise for commercial whaling, which is banned."[1][3] The Institute has also been called the "Japanese Government's whalers", and the Japanese government is reported to subsidise their operations with millions of dollars each year, despite the whale catch being sold commercially by the research program.[4][5]

The ICR attempts to catch nearly a thousand whales per annum,[6] asserting that it is necessary for cetacean research. According to the section two of article VIII of the IWC convention, any whale taken under the "special permits shall so far as practicable be processed." The meat is then sold domestically.

Whale Research Programs
Biological research including the collection of samples from the Antarctic Ocean and the North-Western Pacific Ocean under special permit from the Government of Japan (JARPA and JARPN II Programs). Samples are used for studies related to estimation of biological parameters, resource abundance, elucidation of stock structure and the role of whales in the marine ecosystem, and elucidation of the effect of environmental changes on cetaceans.

Sighting Surveys
Conducted in the Southern Hemisphere and the North Pacific to elucidate trends in abundance, density, distribution, and behavior of whales. These surveys include the IWC Southern Ocean Whale and Ecosystem Research (SOWER) Program.

Socio-Economic Research
Conducted to document and clarify the relationship of man and whales from the social, cultural, historical, economical, and dietary culture aspects.

The ICR also conducts research with the objective of promoting normalization of IWC activities in line with the International Convention for the Regulation of Whaling (ICRW) objective of the sustainable utilization of whale resources.

The research program took place near Antarctica from 1988 to 2005. Its stated objectives were to determine mortality rates, whale stock numbers and structure, the role of whales in the Antarctic ecosystem and how environmental changes affect whales. The whaling operation alternated between several pre-established areas intending to take 400 or more minke whales per season.

In 1997 the IWC scientific committee officially reviewed the JARPA program. The committee expected reasonable precision and usefulness of the data collected but disagreed on whether lethal methods were necessary. It was also noted that the results could potentially allow for an increase in the number of minke whales annually taken.[8]

In the final 2007 review the committee agreed with the initial 1997 mid assessment. It recognized that progress had been made in identifying stock structure and at least two stocks were found in the research area. Agreed estimates of abundance could not be developed and preliminary estimates may only reflect major changes in abundance over a long time line. Problems were identified with age and mortality rate data. Krill-related work was welcomed but relatively little progress was made toward understanding the role of whales in the Antarctic ecosystem. Data on pollution was also welcomed but disagreement continued over the analysis of the results. Levels of toxic pollutants were lower in Antarctic whales than those sampled in the Northern hemisphere.[8][9]

The commission made note of the fact that the catches took place in the IWC established Southern Ocean Whale Sanctuary and that improving management of whaling in a sanctuary is unnecessary. The 2007-1 resolution on JARPA is one of several calling on Japan by majority vote to suspend its lethal research.[8][10][11]

Like its predecessor, the research whaling program takes place near Antarctica. Starting in 2005 and continuing to the present day, objectives include monitoring the Antarctic ecosystem, modeling competition between whale species, recording changes in stock structure and improving future management of Antarctic whales. The program calls for 850 or more Antarctic minke whales, 50 fin whales and 50 humpback whales per season.[8] (a quota for humpback whales has not yet been implemented due to intense international opposition)

Disagreement over the value of the research, the use of lethal methods and the sample sizes continued in both the scientific committee and the commission. In 2005 and 2007 the commission passed resolutions by majority urging Japan to stop all lethal research in JARPA II.[11][12][13]

From 1994 to 1999 Japan carried out its research program JARPN in the western North Pacific. Its stated goals were to improve knowledge of stock identity, improve Implementation Simulation Trials for North Pacific Common Minke whales and act as a feasibility study for a program on feeding ecology. The program called for 100 minke whales annually. The results were reviewed by committee in February, 2000. The committee agreed that the information was useful for management but no consensus was reached on whether lethal methods of research were necessary.[14]

As with JARPA, the IWC issued resolutions calling for Japan to cease issuing permits for the take of Minke whales citing concerns over the need for lethal methods such as the 1999-3 Resolution on whaling under Special Permit.[15]

JARPN II began with a feasibility study from 2000 to 2001 to continue taking whales in the western North Pacific Ocean including 100 common minke whales, 50 Bryde's whales and 10 sperm whales. The objectives of the program included study of feeding ecology (such as prey consumption), stock structure and the environmental impacts of cetaceans. In 2002 after the completion of the initial study Japan proposed and began a long-term program to study how feeding ecology relates to sustainable use in the Pacific and within Japan's Exclusive Economic Zone. In 2008 the program included a proposal for an annual take of 340 minke whales, 50 Bryde's whales, 100 sei and 10 sperm whales.[14]

Disagreement over the objectives, methodology, effect on stocks and overall success of the program continued in the scientific committee review of the feasibility study and full program. The full program introduced a change from previous use of the ICRW Article VIII research provision by not specifying an end date. The objectives were deemed unnecessary for stock management by some members and would not contribute significantly to previously identified research needs. The sample size and methods proposed were unlikely to satisfy program objectives and the ecosystem modeling was considered to be poorly developed.[16]

Some contended the program placed undue emphasis on assumed negative effects of cetacean predation on fishery resources while failing to address the effects of fisheries on cetaceans. However, others believed determining the effects of cetaceans on fish stocks and more information on minke stock structure to be critically important. Some stated the feasibility study would provide valuable information on methodology and other aspects of the program would improve over time and contribute to fundamental questions. The committee identified that the pollution objective did not contribute to the goals of the IWC Pollution 2000+ project but remained relevant to the IWC for long term study.[16]

Disagreement over the value of data obtained through lethal methods continued as well. Some argued that a wide range of questions could be answered through non-lethal means such as "for pollutant monitoring (biopsy sampling for fatty acid and stable isotope analysis), for stock structure (photo identification, biopsy sampling and faecal sampling), and for feeding ecology (faecal sampling)." [16] Others argued that prey data was required for modeling purposes that could not be acquired through non-lethal means. However, feeding ecology was not necessarily relevant to stock management according to some who argued biopsy sampling would allow for a greater amount of statistical data.[16]

Argument continued over the potential negative effects of catches, such as stock depletion of O-stock and J-stock whales, when the only data on many of the populations came from selective extrapolations of JSV (survey) data. Proponents contended that the JSV data was reliable and the research area extended from coastal areas to offshore areas thus limiting pressure on coastal stocks.[16]

In 2000, 2001 and 2003 more resolutions were passed by the IWC urging Japan to cease issuing special permits for whaling and limit research to non-lethal methods.[14][17] The most recent Scientific Committee review was conducted in January, 2009.[18] 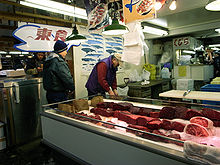 In an open letter to the Japanese government, published in 2002 in the New York Times and sponsored by the World Wildlife Fund (WWF), 21 scientists declared that they "believe Japan's whale 'research' program fails to meet minimum standards for credible science". They were "concerned that Japan's whaling program is not designed to answer scientific questions relevant to the management of whales; that Japan refuses to make the information it collects available for independent review; and that its research program lacks a testable hypothesis or other performance indicators consistent with accepted scientific standards". They accused Japan of "using the pretense of scientific research to evade its commitments to the world community".[19]

The Institute of Cetacean Research responded by stating that it has produced numerous peer-reviewed articles on cetacean science[20] and criticised the open letter as a case of scientists making judgment outside their own area of speciality, and attempted to raise concern about their responsibility to the public. The ICR further noted that the letter contained numerous errors of science and law, reflecting the level of care taken by the scientists endorsing the letter.[21]

A WWF functionary responded in the same journal, pointing out that "identical criticisms of Japanese whaling had been published by expert whale biologists on the International Whaling Commission's Scientific Committee" and that three of the letter's authors defending the Japanese programs had failed to disclose significant financial and organizational ties to the whaling industry.[22] In the same issue, twenty members of the Scientific Committee of the International Whaling Commission confirmed "that the signers of the open letter correctly summarized criticisms made by researchers very familiar with Japanese scientific whaling", a fact omitted by the letter's critics, "betraying a selectiveness that pervades their article". According to them, "so little of any significance to IWC management can be obtained only from whaling catches that it is impossible to justify killing animals on this basis".[23]

The International Whaling Commission's Scientific Committee has repeatedly expressed concern for the objectives and results obtained by the ICR. In a resolution in 2007, the IWC noted that "none of the goals of JARPA 1 had been reached, and that the results of the JARPA 1 [Japanese Whale Research Program under Special Permit in the Antarctic] programme are not required for management under the RMP [Revised Management Procedure]" and called upon the Japanese government "to address the 31 recommendations listed in [the Scientific Committee's JARPA 1 report] to the satisfaction of the Scientific Committee" and "to suspend indefinitely the lethal aspects of JARPA II conducted within the Southern Ocean Whale Sanctuary".[24]

In 2008 the ICR was criticized when photographs released by the Australian government showed pictures of the ICR harpoon ship Yushin Maru No. 2 killing several different whales, and a mother whale and her calf being taken onboard the Nisshin Maru for processing. [25]

Animal rights groups such as Greenpeace and Sea Shepherd Conservation Society have repeatedly clashed with the Institute's ships while they were occupied in whaling, interrupting its activities.[26]

There are estimates by the World Wildlife Fund that the Japanese government has had to invest $12 million into the 2008-09 hunt alone just to break even, and that subsidies in total have amounted to approximately $150 million since 1988.[5]