The ground squirrels are members of the squirrel family of rodents (the Sciuridae) which generally live on or in the ground, rather than trees. The term is most often used for the medium-sized ground squirrels, as the larger ones are more commonly known as marmots (genus Marmota) or prairie dogs, while the smaller and less bushy-tailed ground squirrels tend to be known as chipmunks. Together, they make up the "Marmot tribe" of squirrels, the Marmotini, and the large and mainly ground squirrel subfamily Xerinae, and containing six living genera. Well-known members of this largely Holarctic group are the marmots (Marmota), including the American groundhog, the chipmunks, the susliks (Spermophilus), and the prairie dogs (Cynomys). They are highly variable in size and habitus, but most are remarkably able to rise up on their hind legs and stand fully erect comfortably for prolonged periods. They also tend to be far more gregarious than other squirrels and many live in colonies with complex social structure. Most Marmotini are rather short-tailed and large squirrels, and the Alpine Marmot (Marmota marmota) is the largest living member of the Sciuridae, at 53–73 cm in length and weighing 5–8 kg.

The chipmunks of the genus Tamias frequently spend time in trees. Also closer to typical squirrels in other aspects, they are occasionally considered a tribe of their own (Tamiini).[1]

The ground squirrel is especially renowned for its tendency to rise up on its hind legs. It does this whenever it senses nearby danger, or when it must see over tall grasses. The squirrel then curls its paws flat against its chest and sends a screeching call to warn other family members about the presence of predators.

Ground squirrels may carry fleas that transmit diseases to humans (see Black Plague), and have been destructive in tunneling underneath human habitation[2][3] Though capable of climbing, ground squirrels spend little time in trees.[citation needed]

Palaeosciurus from Europe is the oldest known ground squirrel, and it does not seem to be particularly close to any of the two to three living lineages (subtribes) of Marmotini. The oldest fossils are from the Early Oligocene, more than 30 mya (million years ago), but the genus probably persisted at least until the mid-Miocene, some 15 mya.

It is not clear where the Marmotini originated. The subtribes probably diverged in the early to mid-Oligocene, as primitive marmots and chipmunks are known from the Late Oligocene of North America. Unfortunately, the fossil record of the "true" ground squirrels is less well known, beginning only in the mid-Miocene when modern susliks and prairie dogs are known to have inhabited their present-day range already.

Whether the Marmotini dispersed between North America and Eurasia via "island-hopping" across the Bering Straits or the Greenland region—which both at that time were temperate habitat—and from which continent they dispersed to which, or if both continents brought forth distinct subtribes which then spread to the other, is not known and would probably require more fossil material to be resolved. In any case, that the fairly comprehensive fossil record of Europe—at the relevant time separated from Asia by the Turgai Sea—lacks ancient Marmotini except the indeterminate Palaeosciurus might be taken to indicate that an East Asian or western North American origin with trans-Beringia dispersal is the slightly more satisfying hypothesis. This is also supported by the enigmatic Chinese genus Sciurotamias, which may be the most ancient living lineage of this group, or—if the chipmunks are not included here—close to the common ancestor of the Tamiini and the Marmotini sensu stricto.

In any case, expansion of the Marmotini to Africa was probably prevented by competitive exclusion by their close relatives the Protoxerini and Xerini—the native terrestrial and palm squirrels of that continent—which must have evolved at the same time as the Marmotini did. 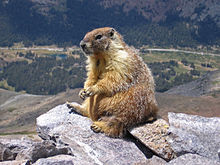