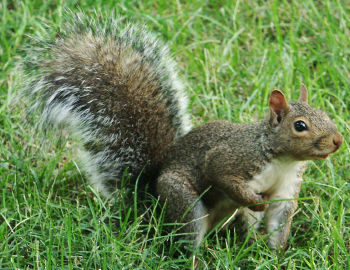 The Sciurids or s are a large family of . The word Sciuridae means "shade-tail," and refers to the bushy appendage possessed by many of its members [Whitaker & Elman (1980): 370] . It includes s, s, s, the s (which include s), and the true s. The African scaly-tailed flying squirrels, which belong to the family , are not sciurids. Sciurids are found in all continents except and .

Sciurids are generally small animals, ranging in size from the , at convert|7|-|10|cm|abbr=on in length, and just convert|10|g|abbr=on in weight, to the , which is convert|53|-|73|cm|abbr=on long, and weighs from convert|5|to|8|kg|abbr=on. Sciurids typically have slender bodies with bushy tails and large eyes. Their is generally soft and silky, although much thicker in some species than others. The colour of sciurids is highly variable between - and often even within - species.

The hindlimbs of sciurids are generally longer than the forelimbs, and they have four or five toes on each foot. Their paws on their forefeet include a , although this is often poorly developed. The feet of sciurids also have a soft pad on the underside.

Sciurids live in almost every habitat from tropical to semiarid , avoiding only the high polar regions and the driest of deserts. They are predominantly herbivorous, subsisting on seeds and nuts, but many will eat insects, and even small vertebrates. Indeed, some tropical species have shifted almost entirely to a diet of insects. The teeth of sciurids follow the typical rodent pattern, with large gnawing s that grow throughout life, and grinding cheek teeth set back behind a wide gap, or diastema. The typical dental formula for sciurids is:dentition2|1.0.1.3|1.0.1.3As their large eyes indicate, sciurids generally have an excellent sense of vision, which is especially important for tree-dwelling species. Many also have a good sense of touch, with e on their heads and limbs.

Sciurids breed once or twice a year, and give birth to a varying number of young after three to six weeks, depending on species. The young are born naked, toothless, blind, and helpless. In almost all species, only the female looks after the young, which are weaned at around six to ten weeks of age, and become sexually mature at the end of their first year. Ground dwelling species are generally social animals, often living in well-developed colonies, but the tree-dwelling species are more solitary-

The living squirrels are divided into 5 , with about 50 and nearly 280 . Though the oldest squirrel fossil, "", dates back to the (Late , around 37.5 - 35 ), this animal was apparently a nearly-modern tree squirrel, albeit with a primitive skull, and it is in fact usually placed in the . Thus, the squirrel lineage may well have originated quite some time earlier.

Mainly from the latest Eocene to the , there was a variety of squirrels around which cannot be assigned to any living lineage with certainty. At least some of these probably were the descendants of the oldest, basal Sciuridae - "proto-squirrels" one might call them as they lacked the full range of living squirrels' ies -, before these d into the subfamilies of today. The distribution and diversity of such ancient and ancestral forms suggests that the squirrels as a group might have originated in North America.

Apart from these sometimes little-known fossil forms, the of the living squirrels is fairly straightforward. There are three main lineages, one comprising the (Oriental giant squirrels). These contain a mere handful of living species in tropical but were more widespread across in prehistoric times. The of tropical is the sole living member of the Sciurillinae. The third lineage is by far the largest and contains all other subfamilies; it has a near-cosmopolitan distribution. This further supports the hypothesis that the common ancestor of all squirrels living and fossil lived in North America, as these three most ancient lineages seem to have radiated from there - if squirrels had originated in Eurasia for example, one would expect quite ancient lineages in , but African squirrels seem to be of more recent origin.

The main group of squirrels also can be split up in three, which yields the remaining subfamilies. The are the only squirrel group for which there is significant uncertainty as regards . Namely, it is not altogether clear how distant the true flying squirrels () are from the tree squirrels (); the former have often been considered a separate subfamily but are now seen as a tribe of the Sciurini. The s on the other hand are usually included with the main tree squirrel lineage, but appear to be about as distinct as the flying squirrels; hence they are sometimes considered a distinct tribe . [Steppan "et al." (2004), Steppan & Hamm (2006)]

Be that as it may, the three-way split of the main squirrel lineage is rather neat from a and perspective. Two of the three subfamilies are of about equal size, containing between nearly 70 to some 80 species each; the third is about twice as large. The Sciurinae contains arboricolous (tree-living) squirrels, mainly of the Americas and to a lesser extent Eurasia. The on the other hand is most diverse in tropical Asia and contains squirrels which are also arboricolous, but have a markedly different and appear more "elegant", an effect enhanced by their often very colorful fur. The - the largest subfamily - are made up from the mainly terrestrial (ground-living) forms and include the large s and the popular s among others; they tend to be more gregarious than other squirrels which do not usually live together in close-knit groups.