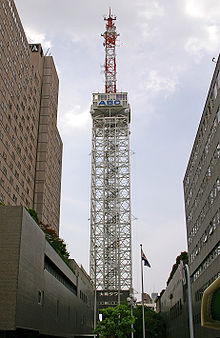 Osaka Tower (大阪タワー, Ōsaka Tawā?) was an observation and radio tower built beside the headquarters of Asahi Broadcasting Corporation (ABC) in Kita-ku, Osaka, Japan. Besides functioning as a radio and television tower, it also relays radio communication for the taxi companies.

The tower is 160 meters (525 feet) high. Built in 1966, it was constructed with metal tubing in a quadratic lattice structure and has been designed to handle vibrations and a wind velocity of up to 90 meters per second. 102 meters up, there is a two story observation deck. Below this, the tower is painted in white and above it in red and white.

The tower cost a total of 400 million yen and construction was finished in 1966. It has an elevator that can carry 30 persons up to the observation deck, which in turn, can accommodate 270 persons. 4000 visitors attended the inauguration. In 1979, the "Sky Studio" was installed on the second floor of the observation deck, broadcasting a morning show with weather, traffic conditions, etc. The observation deck was closed to the public in 1997 after heightened security measures due to, among other things, the mail bomb incident of 1994. In 2008, the tower was scheduled to be removed, because of the moving headquarters of ABC to Fukushima-ku, Osaka, Japan. It was finally demolished in 2009.