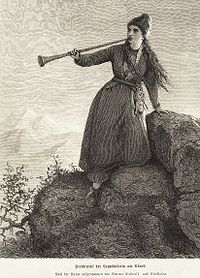 A Nordic Sami woman playing Lur horn in the evening. A wood cut made by Emma Edwall after nature in the mid 1800's.

In traditional Sami music songs (e.g. Kvad [1] and Leudd songs [2]) and joiks are important musical expressions. The Sami also use a variety of musical instruments, some unique to the Lapp, some traditional Scandinavian, and some modern introductions.

Improvised, highly spiritual songs called joiks (North Sami: luohti; South Sami: vuolle) are the most characteristic song type. (The same word sometimes refers to lavlu or vuelie songs, though this is technically incorrect.) Joiks do not rhyme, and have no definite structure. They are typically about any subject of importance to the singer, and vary widely in content. Purely folk joiks have declined in popularity over the 20th century, due to the influence of pop radio and religious fundamentalism, especially Laestadianism. Nevertheless, joik performers of some fame include Angelit (former Angelin tytöt, Girls of Angeli), Wimme Saari and Nils-Aslak Valkeapää from Finnish Lapland. Many modern singers are signed to DAT, the premier record label in Sami music.

The most famous Sami singer is Mari Boine of Norway, who sings a type of minimalist folk-rock with joik roots. Some non-Sami artists, including RinneRadio, Xymox and Jan Garbarek, have used joik and other Sami styles in their music.

In January 2008, the Sami artist Ann Marie Anderson, singing "Ándagassii" qualified to the finals of Melodi Grand Prix 2008, (the Norwegian national selection for the Eurovision Song Contest 2008), but she did not win.

Some sources have commented on a supposed lack of musical musical instruments among the Sami, with one 1885 work noting: "They cannot claim to possess a single instrument of their own, not even the most primitive."[3] Despite these beliefs, the Sami employ a variety of musical instruments, several unique to them. Among their more unique instruments are the fadno, a reedpipe made from Angelica archangelica stalks, and the Sami drum. Late 18th century researchers also noted two bagpipes in Lapland:[4] the sak-pipe and the wal-pipe.[5]

Other Sami instruments of wider Scandinavian usage include the lur (a long horn trumpet),[6][7] and the harpu,[8] a zither similar to the Finnish kantele.[9] Willow flutes are often made from the bark of the quicken tree or mountain ash.[10]

Modern bands use a wide variety of instruments, especially the fiddle, concertina, and accordion.