Berwickshire
Not to be confused with Berwick-upon-Tweed (borough).

Berwickshire or the County of Berwick is a registration county, a committee area of the Scottish Borders Council, and a lieutenancy area of Scotland, on the border with England. The town after which it is named—Berwick-upon-Tweed—was lost by Scotland to England in 1482. The county was on occasion referred to as Duns-shire or Dunsshire during the Victorian period and after, reflecting the fact that Duns had become the county town.

Berwickshire was formerly one of the ancient counties of Scotland, but was abolished in 1975 during local government reorganisation. Its county town, after which it is named, had been Berwick-upon-Tweed, but the royal burgh changed hands in 1482, subsequently becoming part of the county of Northumberland, in England. Thereafter the county's administration was conducted at Duns or Lauder until Greenlaw became the county town in 1596.[1] When a county council was established in 1890 the county town once more became Duns, where the former county's Sheriff Court still sits, and where the Scottish Borders Council still maintains a principal set of offices.

At the time of the county's abolition it contained four burghs and four districts:

The Local Government (Scotland) Act 1973 that abolished the county incorporated its area into the Borders Region. The region existed from 1975 until 1996, and was divided into four districts, one of which was named Berwickshire. The District of Berwickshire was not identical with the former county however: the burgh of Lauder and most of the county's West District were included in Ettrick and Lauderdale, while the parish of Nenthorn was made part of Roxburgh District. Berwickshire District Council's headquarters remained in Duns. 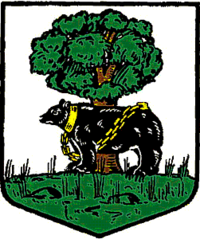 The County Council of Berwick was formed in 1890 by the Local Government (Scotland) Act 1889, and applied for a grant of arms the same year. The grant, by Lord Lyon King of Arms was made on October 10. The arms showed a bear chained to a wych-elm tree, which formed part of the insignia of the borough of Berwick upon Tweed, and was an heraldic pun on the town and county's name.[2]

On November 12, 1975, the arms were regranted to Berwickshire District Council.[3] On the abolition of the district council in 1996, the arms reverted to the Crown.

The Berwickshire News is still published weekly, and numerous organisations and groups have retained Berwickshire in their titles (i.e.: the Berwickshire Housing Association, Berwickshire Sports Council). The Berwickshire Civic Society is currently (2007) campaigning for road signs at the entrances to the old county to have notices added saying 'You are now entering the ancient county of Berwickshire', and they hold an annual Keep Berwickshire Tidy Campaign, judged each April.