Robert Paul Holdstock (2 August 1948 – 29 November 2009) was an English novelist and author best known for his works of Celtic, Nordic, Gothic and Pictish fantasy literature, predominantly in the fantasy subgenre of mythic fiction.

Holdstock's writing was first published during 1968. His science fiction and fantasy works explore philosophical, psychological, anthropological, spiritual, and woodland themes. He received three BSFA awards and won the World Fantasy Award in the category of Best Novel of 1985.

Robert Holdstock, the oldest of five children, was born in Hythe, Kent. His father, Robert Frank Holdstock, was a police officer and his mother, Kathleen Madeline Holdstock, was a nurse. At the age of seven years, Robert started attending the Gillingham Grammar School in the Medway Towns. As a young adult he had jobs including banana boatman, construction worker, and slate miner.[1]

As an adult he earned a Bachelor of Science from University College of North Wales, Bangor, with honours in applied Zoology (1967–1970). He continued his education, earning a Master of Science in Medical Zoology at the London School of Hygiene & Tropical Medicine in 1971. He conducted research at the Medical Research Council in London from 1971 to 1974 while also doing part-time writing. He became a full-time writer during 1976 and lived out the rest of his life in North London.[2][3] 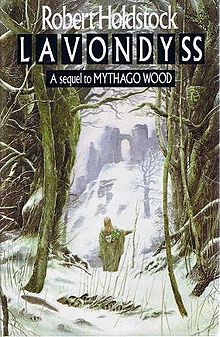 Robert Holdstock's first published story, Pauper's Plot, appeared in the New Worlds magazine in 1968.[6] His first novel was a science fiction work titled Eye Among the Blind, released in 1976.[7]

During the late 1970s and throughout the 1980s Holdstock wrote many fantasy and science fiction novels along with a number of short stories, most of which were published under a pseudonym. Robert Holdstock's pseudonyms include Robert Faulcon, Chris Carlsen, Richard Kirk, Robert Black, Ken Blake, and Steven Eisler.[8] During this same period, he wrote "Space Wars, Worlds, and Weapons," a series of essays about the various tropes of Science Fiction, interspersed with colour reproductions of space art.

Holdstock wrote a novella, The Dark Wheel, which was included with the best-selling 1984 computer game Elite. Holdstock has also written The Emerald Forest, based on the film of the same name as directed by John Boorman (director of Deliverance and Excalibur amongst others). He also novelised episodes of the Granada television seris Bulman.

From 2001 to 2007 Holdstock produced a trilogy of fantasy novels, the Merlin Codex, consisting of Celtika, The Iron Grail and The Broken Kings.

Holdstock's works have been subject to much literary analysis. The majority of this analysis is of Mythago Wood.

David Pringle describes Eye Among the Blind, Holdstock's first science fiction novel, as a "dogged, detailed, somewhat slow-moving planetary mystery."[10] Regarding the same novel Ursula K. Le Guin remarked "As strong a treatment of a central theme of science fiction – alienness, and the relation of the human and the alien – as any I have read."[11]

According to Michael D. C. Drout, a modern J. R. R. Tolkien scholar, Holdstock's fantasy is a significant part of the fantasy literature genre. This is because (in the Ryhope wood series) Holdstock has created literary arts containing the power and aesthetic standards of Tolkien’s fantasy without being either a "close imitation of" or a "reaction against" Tolkien. Drout considers Holdstock, along with Ursula K. Le Guin, a worthy inheritor of the fantasy tradition created by Tolkien.[12] According to a study of Tolkien's works by Partrick Curry, Holdstock is placed in a quartet of noteworthy fantasy authors including Ursula K. Le Guin, John Crowley and Marion Zimmer Bradley for writing fantasy books that come close to Tolkien's breadth and depth of imagination, and "in some respects surpass Tolkien."[13]

One essayist states "Robert Holdstock's gift for evoking landscapes and weaving mythic patterns is outstanding."[14] Accordingly, the covers of his books have been produced by a variety of notable Science Fiction and Fantasy illustrators. The original UK and US covers of Mythago Wood were illustrated by Eddi Gornall and Christopher Zacharow, respectively; Geoff Taylor illustrated the original UK covers for the Mythago Wood sequels Lavondyss, The Bone Forest, The Hollowing and Merlin's Wood. Illustrators of subsequent covers and editions include Jim Burns, Tom Canty, John Howe, Alan Lee, John Jude Pallencar, Larry Rostant, and Ron Walotsky. John Howe stated "Holdstock is to me one of the best Celtic fantasy authors alive today."[15]

David Langford offers praise for most of Holdstock's work, but regarding Merlin's Wood he states "the overall narrative is flawed, distorted by its weight of undeserved loss and inaccessible healing."[16]