Mobberley railway station serves the village of Mobberley in Cheshire, England. The station was opened on 12 May 1862 by the Cheshire Midland Railway which was absorbed by the Cheshire Lines Committee on 15 August 1867. It is located to the north of the village and is managed by Northern Rail. The station is 30 km (18½ miles) south of Manchester Piccadilly on the Mid-Cheshire Line towards Chester. 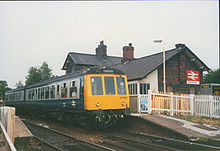