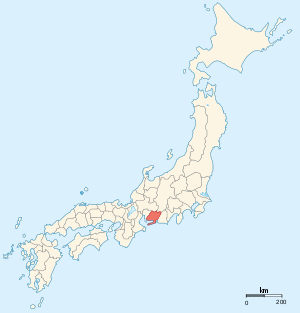 Mikawa Province (三河国, Mikawa no kuni?) is an old province in the area that today forms the eastern half of Aichi Prefecture.[1] It was sometimes called Sanshū (三州 or 参州?). Mikawa bordered on Owari, Mino, Shinano, and Tōtōmi Provinces.

Even today, Mikawa is used to refer to the eastern portion of Aichi, including such cities as Toyohashi, Okazaki, Hekinan and Toyota.

Mikawa was the original fief of the shogun Tokugawa Ieyasu before he gained control of Kantō. Okazaki was the principal castle town of Mikawa, although Yoshida Castle, near Toyohashi, was also a major fief at times. Mikawa is famous in Japan for its fireworks, manufacturing most of Japan's fireworks. In order to maintain security, Mikawa was the only area permitted by the shogun to produce gunpowder, which led to the fireworks industry. The annual Okazaki fireworks are some of the best in Japan.

During the Edo period, the following domains were located in Mikawa: