The National Center Test for University Admissions (大学入試センター試験, Daigaku Nyūshi Sentā Shiken?) is a type of standardized test used by public and some private universities in Japan. It is held annually during a weekend in mid-January over a period of two days.

The Center Test has become something of a national phenomenon in Japan, with television coverage and newspapers publishing test questions. To many test-takers in Japan, the test is the difference between college entrance and one year's study for the next year's exams as a rōnin. Since the test is only administered annually and entrance to top-ranked universities and colleges is so competitive in Japan, the test has become the subject of scrutiny by many. In addition, rules for tardiness and absences are extremely strict and always results in the forfeit of taking the exams as there are no "makeup" sessions or re-takes offered.

The test is administered by National Center for University Entrance Examinations, an Independent Administrative Institution (IAI). The National Center Test superseded the Common first-stage exam (共通一次, kyōtsū ichiji), which was administered from 1979 to 1989, letting private universities use the test scores as a criterion for admissions decisions.

Since the test is held in the midst of winter, snow can delay the exam in some regions but typically the test starts and ends near the same exact time throughout the entire nation.

The function of the Center Test depends on the institution, but most can be categorised into the following three:

Because candidates are unable to know their Center Test scores before applying to their universities, most write their answers on the question sheets (which can be taken home), and check their answers using rubrics published by cram schools.

A number of cram schools and other companies have services to which candidates can send their scores and get to know their overall position in the other users of the service, called Center Research (センターリサーチ, Sentā Risāchi?). Candidates can use this information to see how they fared compared to other test-takers, and make their final admissions decision. (In Japan, candidates may not apply to all the universities they want to, such as in the United States, mainly because the secondary exams fall near or on the same day.) 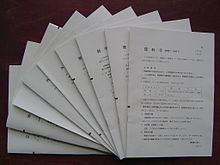 Booklets of questions given to test takers.

There are separate tests for each subject, and each is multiple choice. The tests follow the curriculum guidelines published by the Ministry of Education, Culture, Sports, Science and Technology.

There are a total of 29 tests in six subjects. Candidates take the subjects specified by their university. As an exception, however, candidates for the English (written) exam must take the English (listening). 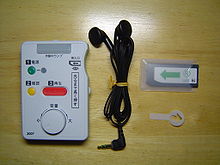 A listening exam was introduced in 2006 for candidates of the English (written) exam. An IC player was handed out to all candidates of the exam, and a whole 30 minutes of testing time was devoted to the explanation of usage of this device.

There was some controversy surrounding the introduction of this exam, and critics doubted the reliability of this device. In 2006, there were 497 (about 0.09%) cases in which candidates had to be given re-tests because of device failure.[1]

Since the IC players could be taken home, candidates around Japan disassembled the devices at home, finding that the players used Sony's Memory Stick for storage of the exam. Although no note of the manufacturer was made in either the media or on the device itself, the use of this storage format led most to believe that Sony was the manufacturer.

The memory stick from a sample device provided to an examination supervisor prior to the 2007 examinations, containing a full sample audio test, contained four files with the .bin file extension. A cursory attempt to extract the content of these files failed and changing the file extension to common audio formats, such as .wav, .mp3, and .wma also did not result in playable files. The total size of all four files was 4.63MB, and the total listening time of 30 minutes makes it obvious that the audio tracks are highly compressed.

Additionally, the non-intuitive sequence of buttons needed to operate the player raises concern over the possibility of candidates having difficulty operating the player under test conditions. The inability to stop and restart the audio tracks seems probably due to a wish to ensure that all candidates complete all the listening within the test period. Of even more concern is that the memory stick on the sample player was exposed and could be removed by candidates, leaving open the possibility that candidates may inadvertently remove the memory stick during the test and render the player inoperable.