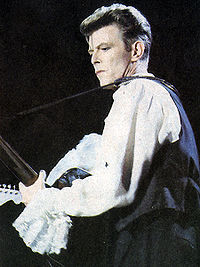 The following is a listing of films in which David Bowie has appeared. David Bowie, to date has starred in many films such as leading roles in The Man Who Fell to Earth and Just a Gigolo or cameo appearances in films such as Zoolander and The Last Temptation of Christ. For his acting performances, Bowie has won the Saturn Award and been nominated for the MTV Movie Award. He also won a Daytime Emmy Award in the category of Outstanding Special Class Special in 2003 for Hollywood Rocks the Movies: The 1970s with David Bowie (AMC). Bowie also appeared on television series including Extras, SpongeBob SquarePants, Dream On, and The Hunger. The list also features officially released David Bowie concert or tour DVDs and documentaries.