The Last Temptation of Christ (film)

The Last Temptation of Christ (film) 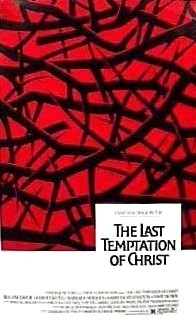 Like the novel, the film depicts the life of Jesus Christ, and its central is that Jesus, while free from , was still subject to every form of that humans face, including fear, doubt, depression, reluctance and lust. This results in the book and film depicting Christ being tempted by imagining himself engaged in sexual activities, a notion that has caused outrage from some s. The movie includes a disclaimer explaining that it departs from the commonly-accepted portrayal of Jesus' life, and that it is not intended to be an exact recreation of the events detailed in the .

The film received an nomination for Martin Scorsese as Best Director.

of Nazareth is a carpenter in the Roman-occupied . He is torn between himself as a man and his knowledge that God has a plan for him. His conflict results in self loathing, and he collaborates to construct crosses Romans used to revolutionaries, an act that brands him a traitor in the eyes of his fellow Israelites.

belongs to a nationalistic splinter faction which wishes to revolt against Roman rule (see or ). He is sent with orders to kill Jesus for being a collaborator. Judas suspects Jesus is the Messiah, and asks Jesus to lead a revolution against the Romans. Jesus tries to tell Judas that his message is love, that love of mankind is the highest virtue that God wants. Judas joins Jesus in his ministry, but Judas tells Jesus that he will kill him if he strays from revolution.

Jesus also has an undisclosed history with , a Jewish . Mary asks Jesus to stay with her, which Jesus seriously considers before leaving for a community. Jesus later saves Mary from an angry mob which has come to stone her for her prostitution and working on the sabbath. Jesus persuades the crowd to spare her life—instructing "he who is without sin [to] cast the first stone"—and instead preaches to them using many of the from the .

Jesus develops a following of disciples, but throughout this time he is still uncertain of his role and his status as Messiah. He travels with his disciples to see , who has heard of Jesus' reputation. John baptizes Jesus, and that night the two discuss their differing theologies. John believes that one must first gain freedom from the Romans before the world of God is declared, while Jesus believes that love is more important. Jesus then goes off into the desert to see if God really speaks to him.

While in the desert Jesus is tempted three times by . Jesus resists all these temptations and instead has a vision of himself with an ax chopping down an apple tree. He appears as a vision to his waiting disciples where he rips out his heart and tells them to follow him. With newfound courage as the Messiah he proceeds to perform many signs and wonders: giving vision to a blind man, turning water into wine, and raising from the dead.

Eventually his ministry reaches where he is enraged by the money changers in the temple and throws them out. The angry Jesus even leads a small army to try and take the temple by force. But instead he halts on the steps and begins bleeding from the hands. He realizes that violence is not the right path, and that he must die in order to bring salvation to mankind. Confiding in Judas he asks his best friend and strongest apostle to turn him in to the palace guards, something that Judas does not want to do. But Jesus implores that this is the only way. A crying Judas acquiesces.

Jesus joins his disciples for the seder—the . After the meal, while in the garden of , Judas leads the palace guards to take Jesus away. tells Jesus that he must be put to death because he represents a threat against the status quo, the . Jesus is flogged and a crown of thorns is placed on his head. He is lead to , where he is crucified.

While on the cross, Jesus sees and talks to a young girl who appears to be an . She tells him that he is not the son of God, not the , but that God loves him, is pleased with him, and wants him to be happy. She brings him down off the cross and leads him away.

She takes him to be with Mary, and the newly married couple make love. The couple has a child and lives an idyllic life in what looks to be a Northern European forest. Mary unexpectedly dies, and the sobbing Jesus is told by his angel that all women are "Mary," and thus he is betrothed to Mary and , sisters of Lazarus. He starts a family with them and lives his life in peace. When he encounters the apostle Paul preaching about the Messiah—that is, about "Jesus" he tries to tell Paul that he is the man that Paul has been preaching about.

Near the end of his life, Jesus' former disciples visit him on his deathbed. Judas comes last and calls Jesus a traitor. It is revealed that the angel is in fact Satan, who has been tempting him into this life of comfort as a mortal man. Jesus realizes that he must die to bring salvation to mankind. Crawling back through the burning city of Jerusalem, he reaches the site of his crucifixion and begs God to let him fulfill his purpose and to "let [him] be [God's] son."

At the very end of the film, before the closing credits, the screen fades into solid white at the point where Jesus dies on the cross. According to director Martin Scorsese, this was unintentional. The camera used in the shooting was damaged and leaked light onto the film. The fade to white wasn't discovered until after the film was processed. [http://imdb.com/title/tt0095497/trivia]

Martin Scorsese had wanted to make a film version of Jesus' life since childhood. Scorsese optioned the novel "The Last Temptation" in late 1970s, and he gave it to to adapt. "The Last Temptation" was originally to be Scorsese's follow-up to "The King of Comedy"; production was slated to begin in 1983 for Paramount. The original cast included as Jesus, as , as [Revealed in an interview with Mark Lawson on "Front Row", BBC Radio 4, Tuesday 23 September, 2008.] and as . Management at Paramount and its parent company, became uneasy due to the ballooning budget for the picture and protest letters received from religious groups. The project went into turnaround and was finally canceled in December 1983. Scorsese went on to make "After Hours" instead.

In 1986, Universal Pictures became interested in the project. Scorsese offered to shoot the film in 58 days for $7 million, and Universal ed the production. Critic and screenwriter worked with Scorsese revising Schrader's script. Aidan Quinn passed on the role of Jesus, and Scorsese recast in the part. Sting also passed on the role of Pontius, with the role being recast with . began in October 1987. The location shoot in (a first for Scorsese) was difficult, and the difficulties were compounded by the hurried schedule. "We worked in a state of emergency," Scorsese recalled. Scenes had to be improvised and worked out on the set with little deliberation, leading Scorsese to develop a minimalist aesthetic for the film. Shooting wrapped by Christmas.

The film contains many ideas not present in the Bible. This is seen as a point of contention despite the film opening with a disclaimer stating that it is 'not based on the gospels' and is 'fictional'. The main source of controversy stems from a scene near the end of the movie in which Jesus is depicted as marrying instead of dying on the cross. A brief scene of the married couple making love is shown in the film, which sparked the anger of many protesters.

The rationale behind this scene is that it represents Satan's tempting of Christ with the life of a normal man, free from the burden of being crucified and of being the salvation of mankind. In the guise of a beautiful, angelic child, Satan deceptively brings Christ down from the cross and gives him the life he has desired, telling him he is in fact not the Messiah. Under Satan’s ruse, Jesus marries and raises a family. However, as he is nearing the end of his envisioned life, his most devoted disciple, , awakens him to the truth of what is happening. As Judas calls him a traitor, Jesus finally realizes he has abandoned his duty to be crucified and to be the salvation of mankind. Seeing that he has been tempted into living a man’s life and dying a peaceful death, Jesus crawls out into the streets of Jerusalem as it burns with the fires of the , and begs God to return him to his crucifixion, finally rejecting Satan’s offering. At that point, he is returned to the cross . Jesus has now been tempted as a man, and having survived this temptation utters his dying words, "It is accomplished."

Other controversial ideas include images of Jesus constructing crosses for the Romans, kissing other men on the lips, being tormented by the voice of , and using the divine name in the form "".

Protests against the movie from religious communities began before the film had even finished production. The studio was expecting a backlash due to the controversies revolving around any media treatment of Christ (see ), but the protests accompanying "Last Temptation" were unprecedented.

The film has been supported by scholars, film critics and some religious leaders. In his defense of the movie, noted critic writes that Scorsese and screenwriter :

Writers at NNDB.com claim that "Paul Schrader's screenplay and Willem Dafoe's performance made perhaps the most honestly Christlike portrayal of Jesus ever filmed."

Some Christian scholars acknowledge that maintaining equilibrium between these two contrasting natures might have been as difficult as "The Last Temptation of Christ" depicts, and that the notion is even suggested in the when Christ admits, "I have come down from heaven, not to do My own will, but the will of Him who sent Me" (chapter 6). In the case of Kazantzakis's and Scorsese's Christ, there is a notable difference between Christ's will and the will of his Father; yet driven by his love for mankind and his devotion to his Father, Christ constantly denies his own will in order to fulfill his divine mission as Savior.

However, some Christians, along with people of other faiths, retain a negative view of the film. Conservative film critic (who is Jewish) has an extreme dislike of the film for its biblical inaccuracy, especially in what he considers its portrayal of Judas Iscariot as braver and wiser than Jesus.

When "" was released in 2004, Scorcese's film was mentioned very often when compared to 's, mostly for the portrayals of Judas Iscariot and Pontius Pilate and also in analysis of how the 2004 film was an enormous blockbuster while the 1988 film didn't do well at the box office even though both were highly controversial.

On Rotten Tomatoes.com, the film rating website, the picture had reached a rating of 81%, with an average rating of 7.2 out of 10 as of July 2008 [ [http://www.rottentomatoes.com/m/last_temptation_of_christ/ The Last Temptation of Christ - Movie Reviews, Trailers, Pictures - Rotten Tomatoes ] ] .

The film's musical was composed by and was released on CD with the title "". The film's score itself helped to popularize . Gabriel compiled additional material by various musicians as "".

Various vocal samples of as were used in single "The Prophet" by . The track was released in 1997 and quickly became a worldwide club hit.