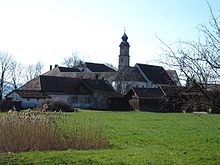 Wurmsbach Abbey (Kloster Mariazell-Wurmsbach) is a monastery of Cistercian nuns located in Bollingen near Rapperswil-Jona, in the Canton of St. Gallen, Switzerland. It is located on the north shore of Lake Zurich. The house is a part of the Order of Cistercians of the Common Observance (O.Cist.).

Count Rudolf of Rapperswil gave his castle of Wurmsbach together with a considerable area of land in 1259 for the foundation of a religious house and the abbey was established. It was initially a dependency of the Cistercian monks of Abbey of St. Urban in Wettingen. The abbey church was dedicated in 1281. 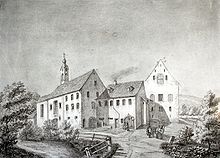 North view of the church, abbey, and guest-house. Pen and ink drawing by Johannes Rudolf Rahn, 1859

During the first Battle of Villmergen in 1656 and again during the occupation of the region by the French Revolutionary Army in 1799, the nuns were obliged to flee. On both occasions the abbey was completely pillaged, with the consequence that there are few treasures left.

The abbey is renowned for its location at the lake side. It overlooks Lake Zurich and the church is listed as a building of historical significance.

The nuns run a secondary boarding school for girls. Gardening takes a great deal of time because the land owned by the abbey is considerable. The gardens are known for the herbal remedies grown.