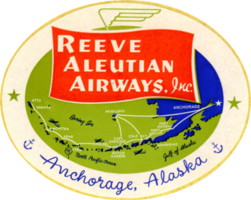 Reeve Aleutian Airways airline codes|RV|RVV|Reeve was an based in the of . It ceased operations on .

"For the story of Bob Reeve before World War Two see that article."

A strike by sailors on s operating between and Anchorage started on April 6 1946. Reeve, along with Merritt Boyle and Bill Borland began flying between Seattle and Anchorage, with stops at , or . Each trip carried a full load of 21 passengers and took an average of 9½ hours. In 53 days, 26 round trips were made. Reeve would work all night on inspections and maintenance of the plane whilst at Spokane, and then fly back to Anchorage having had very little sleep. Reeve earned $93,000 from this activity, enough to pay for the DC-3 and buy three more.

NC14994 to replace the DC-3, which subsequently repaired and eventually sold to Los Angeles Air Service

On March 24 1947, "Reeve Aleutian Airways" was incorporated. The company was running scheduled and charter services all over Alaska, despite not having a formal CAA certificate. About this time, Reeve was ordered to get authorisation to use the wartime Chain bases he was using. Reeve flew to Washington and leased field and acquired landing permits for Kodiak, Adak and Attu. Electra NC14994 was traded in during 1947, going to Continental Airlines.

also needed the base on its run to the Orient. Reeve and Croil Hunter (President of Northwest) flew to Washington to plead their case without success, but on their way back to the hotel, Reeve met Major General Sam Anderson, who had served with Reeve's brother Richard, and explained their predicament with the result that the military were persuaded to pronounce the field "militarily desirable" and thus Shemya was saved.

S-43 N15062 was purchased in March 1950. In late 1950, the bank was reluctant to loan Reeve any more capital. Reeve flew to in an effort to get a loan, but was turned down. He ran into Elmer Rasmusson, an Anchorage banker whilst in Seattle, with the result that Rasmusson loaned him $125,000 to get going again. On the day he got the loan, Reeve heard that Pacific Airmotive, who were doing his maintenance, were going out of business in Alaska. Reeve flew back to Anchorage and bought the business, which was renamed "Reeve Airmotive".

In 1952, the new opened and all the other airlines moved there. The CAA was going to close Merrill Field, but it was retained for use by "Reeve Aleutian" and private operators. in 1953, final military deactivation of the Aleutian airfields occurred. Reeve obtained leases on Shemya and . Shemya closed in 1954 and all flights were switched to Cold Bay. In January 1957, DC-3 N49363 was sold to Twentieth Century Aircraft. During the 1950s, St. George and were served by airdrop, Reeve installing salvaged bomb releases in his DC-3s to enable this.

was served as required.

A was decided on and the first plane, N172RV was purchased new in 1972. In 1973, the Electra was certified by the CAA to land on gravel runways. YS-11 N173RV was puirchased new in that year.

In 1979, "Reeve Aleutian" started a service from Cold Bay to Seattle-Tacoma.This service lasted for three and a half years. During that time, only seven flights were cancelled due to weather and two due to mechanical reasons out of 458 scheduled flights. YS-11 N169RV was purchased from the Government in February 1980. DC-6A N6119C was sold to Northern Air Cargo in April 1980. C-46 N9852F was sold in 1980. C-46 N1822M was sold in 1981. YS-11A N172RV was involved in an accident on February 16 1982 at King Salmon, Alaska. it was returned to service. Electra N1968R suffered loss of No.4 propeller in-flight while enroute from Cold Bay to Seattle on June 8 1983. Piloted by Jim Gibson, it landed safely at Anchorage, Alaska. It too was repaired and returned to service. Electra N7135C was purchased from in September 1983 and withdrawn from service for use as a spares source, eventually being scrapped at Anchorage.

to relieve the backlog.

The airline entered the 1990s on a relatively tight budget, with three aircraft mothballed and one leased out (as of 1988). YS-11A N169RV was sold to in February 1995. In August 1999, "Reeve Aleutian" entered into a code-share agreement with on the route between Seattle, Anchorange and Petrovpavlosk and Yuzhno-Sakhalinsk. One of the Electras was sold in 1999.

Several aircraft belonging to "Reeve Aleutian" were involved in accidents.

*Blue and Red tail, with the lettering "RAA" in white. Blue fuselage with red s, and the name "Reeve Aleutian" over the middle passenger windows, in white.