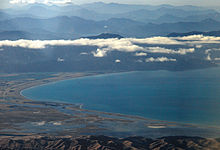 The bay which has given the winery its name

Cloudy Bay Vineyards is a winery in the Marlborough region of New Zealand. The winery is primarily noted for its Sauvignon Blanc wines, and have played an important pioneering role in establishing New Zealand's and Marlborough's reputation. Cloudy Bay's first commercial vintage was produced in 1985 from purchased grapes, and the company later planted its own vineyards. It was one of the first New Zealand wines to be widely exported and came to attention because its fruit-forward style and very pronounced varietal character. The classic French Sauvignon Blancs from Sancerre and Pouilly-Fumé from the Loire Valley were typically more restrained and austere in comparison, and with higher acid levels.

Cloudy Bay’s 140 hectares (350 acres) of vineyards are located at three sites in the winegrowing region of Marlborough, including areas close to the bay for which they are named. The region is noted for its production of Sauvignon Blanc wines.[1] The vines are planted on deep alluvial gravels. Five long-term contract growers also work closely with Cloudy Bay.

Cloudy Bay Vineyards is now owned by the multinational luxury goods firm LVMH (Louis Vuitton Möet Hennessy) through its champagne house Veuve Clicquot, and exports to 20 countries around the world, with the largest markets being Australia, United Kingdom, USA, Europe and Japan.