Champagne Krug—a "négociant-manipulateur" with offices in Reims, the main city in Champagne—was one of the famous Champagne houses who formed part of the membership of the Grande Marques. Krug Grande Cuvée is one of the crown jewels in the LVMH wine division, placed alongside the Moët et Chandon's Cuvée Dom Pérignon and Veuve Clicquot's La Grande Dame. As a Champagne, it is distinctive and easily recognised by taste due to the house's policy of complete barrel fermentation and very extended lees aging; on the nose, Krug is identified by its strongly developed and aged nutty lees influence and autolytic notes, a certain oakiness, as well as a combination of disgorgement freshness and oxidative maturity. On the palate, Krug wines commonly display a raciness resulting from suppression of the malolactic fermentation, and a richness both from lees and from barrel fermentation. It is one of the most obviously oaky of Champagnes and is almost invariably dry (less than 10 g/l residual sugar).

History of the House 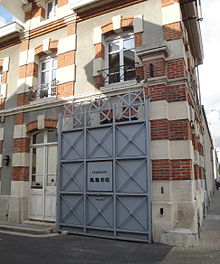 Entrance to Krug's facilities in Reims.

Krug was established in 1843 by Johann-Joseph Krug, a German immigrant from Mainz on the Rhine. In relative terms, this makes it a middle-aged to young house, compared to the old houses in Champagne, several of which have been going for more than ten generations. Johann learned his trade at Champagne Jacquesson for nine years before setting up Krug at Reims. His son, Paul continued the family business, who was succeeded by his son, Joseph Krug II in 1910. Joseph's nephew, Jean Seydoux, took the reins in 1924. Jean Sedoux, together with Paul Krug II are generally credited with creating the Krug style with the now defunct Private Cuvée. In 1962, Henri Krug took over the house, and he is still largely responsible for the winemaking decisions here, along with Eric Lebel. The house is now part of global luxury brands conglomerate Louis Vuitton Moët Hennessy (LVMH). Like most of the companies in the group, Krug runs with a certain amount of autonomy. This perceived and real autonomy has played a large role in maintaining the house's reputation and consistent style.

The house owns 20 hectares of vines in Aÿ, Le Mesnil, and Trépail. They get the rest of their grapes from long-term contract growers. Unlike other négociants, Krug's growers consider themselves part of a long-standing prestigious group that openly reveal Krug as the destination of their grapes.

Aÿ supplies the Pinot Noir which goes into the non-vintage Rose, and Le Mesnil produces the Chardonnay which makes up the Clos du Mesnil Blanc de Blancs vintage. Krug owns a relatively small proportion of vineyard. 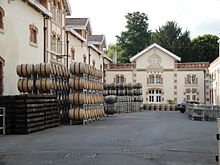 Barrels stored in Krug's courtyard waiting to be used.

All the wines at Krug undergo primary fermentation in small 205 litre oak barrels from the Forest of Argonne and Central France. The barrels are all well-seasoned and organoleptically inert. Each cru is vinified separately, with no malolactic fermentation, and the two rackings are done by gravity. Reserve wines are transferred to stainless-steel tanks.

The house's standard release, the Grande Cuvée NV is blended from anywhere between 20 and 30 crus across Champagne, with almost all being rated 100%, or Grand Cru. The reserve wines hail from 6 to 10 vintages, and not necessarily the most recent vintages, and usually including a fair proportion of declarable vintages which the company insists explains the high quality of their wine. Krug disgorges its wines no earlier than six years on lees, with the Collection series being held on lees for as long as 15 to 20 years.

Krug utilises all three Champagne varieties in their wines, Chardonnay, Pinot Noir, and Pinot Meunier. However, Chardonnay is the mainstay of the Grande Cuvee and their flagship single vineyard vintage, the Clos du Mesnil is made in the Blanc de blancs style, made completely from Chardonnay. In April 2008, Krug released the 1995 Clos d'Ambonnay, its debut of a Blanc de noirs Champagne, made entirely from Pinot Noir from a single 0.685 hectares (1.69 acres) vinyard.[1][2] 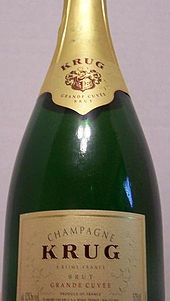 Krug produces mainly Grande Cuvée, supplemented by a non-vintage rosé, a vintage blanc, and a vintage blanc de blancs from the Clos du Mesnil in the Cotes de Blancs and older vintages released as Krug Collection series. The house uses as its competitive edge the fact that it does not make a non-vintage, rather a multi-vintage. Although technically meaning the same thing, Krug's non-vintage, the Grande Cuvée, is a blend of only good, or declarable vintages. The house also emphasises the fact that primary fermentation occurs completely in small oak barrels; a practice not commonplace anymore in Champagne.

Krug is sometimes considered a producer of only prestige cuvées, which is one of the tenets of the company's marketing strategy. They justify this by pointing out the large number of high-rated crus and the choices of vintages, as well as the extended lees ageing regime of their standard wine, the Grande Cuvee as being similar, if not more than most other house's Prestige Cuvees. Certainly the price of Krug wines is much higher than other Champagne, with even the Grande Cuvee being priced higher than other very prestigious and highly regarded Prestige Cuvees such as Taittinger's Comtes de Champagne, Moet's Dom Perignon, Veuve's La Grande Dame, Bollinger's RD etc.