Chartreuse (pronounced: [ʃaʁtʁøz]) is a French liqueur made by the Carthusian Monks since the 1740s. It is composed of distilled alcohol aged with 130 herbal extracts. The liqueur is named after the Monks' Grande Chartreuse monastery, located in the Chartreuse Mountains in the general region of Grenoble in France. The liqueur is produced in a factory in the nearby town of Voiron (Isère).

Chartreuse gives its name to the color chartreuse. It is one of the handful of liquors that continues to age and improve in the bottle.[citation needed]

The two types of Chartreuse are:

Also made by the monks of Chartreuse are:

Chartreuse VEP
VEP stands for Vieillissement Exceptionnellement Prolongé, meaning "exceptionally prolonged aging" in English. It is made using the same processes and the same secret formula as the traditional liqueur, and by extra long aging in oak casks it reaches an exceptional quality. Chartreuse VEP comes in both yellow and green.
Elixir Végétal de la Grande-Chartreuse (142 proof or 71%)
The same base of about 130 medicinal and aromatic plants and flowers; far stronger. It can be described as a cordial or a liqueur, and is claimed to be a tonic. Sold in small wooden-covered bottles.
Liqueur du 9° Centenaire (47%)
Created in 1984 to commemorate the 900 year anniversary of the foundation of the abbey. It is similar to Green Chartreuse but slightly sweeter.
Chartreuse 1605 – Liqueur d'Elixir (56%)
Created to commemorate the return of a mysterious manuscript concerning an elixir of long life to the Carthusian monks by Marshal François Annibal d'Estrées.
White Chartreuse (30%)
Produced and sold between 1860 and 1900.[1]

Furthermore, the monks make a "Génépi". Génépi is the general term in the Alps for a homemade or local liquor featuring local mountain flora. (There are hundreds or even thousands of different Genepi liquors made, many simply by families for their own use each year.) As they have been making Charteuse from local plants for centuries, the monks have recently (2000s) made a Génépi as a sideline product. It is labelled "Génépi des Pêres Chartreux" and is generally only available locally in a 70cl bottle, usually labelled 40% alcohol.

Chartreuse has a very strong characteristic taste. It is very sweet, but becomes both spicy and pungent. It is comparable to other herbal liqueurs such as Galliano, Liquore Strega or Kräuterlikör, though it is distinctively more vegetal. Like other liqueurs, its flavor is sensitive to serving temperature. If straight it is often served very cold, but also features in many cocktails. Some mixed drink recipes call for only a few drops of Chartreuse due to the assertive flavor. 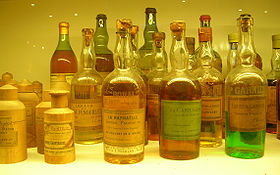 The cellars of the Chartreuse

The old-style pot stills (no longer in regular use, they have been replaced by stainless steel stills)

According to tradition, a marshal of artillery to French king Henry IV, François Hannibal d'Estrées, presented the Carthusian monks at Vauvert, near Paris, with an alchemical manuscript that contained a recipe for an "elixir of long life" in 1605.[2] The recipe eventually reached the religious order's headquarters at the Grande Chartreuse monastery, in Voiron, near Grenoble. It has since then been used to produce the "Elixir Végétal de la Grande Chartreuse". The formula is said to call for 130 herbs, flowers, and secret ingredients combined in a wine alcohol base. The monks intended their liqueur to be used as medicine. The recipe was further enhanced in 1737 by Brother Gérome Maubec.

The beverage soon became popular, and in 1764 the monks adapted the elixir recipe to make what is now called Green Chartreuse. In 1793, the monks were expelled from France, and manufacture of the liqueur ceased. Several years later they were allowed to return. In 1838, they developed Yellow Chartreuse, a sweeter, 40% alcohol (80 proof) liqueur, colored with saffron.

The monks were again expelled from the monastery following a French law in 1903, and their real property, including the distillery, was confiscated by the government. The monks took their secret recipe to their refuge in Tarragona, Spain, and began producing their liqueurs with the same label, but with an additional label which said Liqueur fabriquée à Tarragone par les Pères Chartreux ("liquor manufactured in Tarragona by the Carthusian Fathers").

At the same time, a corporation in Voiron that obtained the Chartreuse assets produced a liqueur without benefit of the monks' recipe which they sold as Chartreuse, but all attempts to reproduce real Chartreuse failed. Sales were very poor, and by 1927 the production company faced bankruptcy, and its shares became nearly worthless. A group of local businessmen in Voiron bought all the shares at a low price and sent them as a gift to the monks in Tarragona.

After regaining possession of the distillery, the Carthusian brothers returned to the monastery with the tacit approval of the French government and began to produce Chartreuse once again. Despite the eviction law, when a mudslide destroyed the distillery in 1935, the French government assigned Army engineers to relocate and rebuild it at a location near Voiron where the monks had previously set up a distribution point. After World War II, the government lifted the expulsion order, making the Carthusian brothers once again legal French residents.

Today, the liqueurs are produced in Voiron using the herbal mixture prepared by two monks at Grande Chartreuse. Other related alcoholic beverages are manufactured in the same distillery (e.g. Génépi). The exact recipes for all forms of Chartreuse remain trade secrets and are known at any given time only to the two monks who prepare the herbal mixture. Chartreuse is also used as an addition to other drinks.[3]

Chartreuse liquors generally have performed very well at international spirit ratings competitions. The basic green offering has won silver and double gold medals from the San Francisco World Spirits Competition. It has also earned an above-average score of 93 from the Beverage Testing Institute and has been given scores in the 96-100 interval by Wine Enthusiast.[4] The VEP Green and VEP Yellow have generally earned similarly impressive scores.[5] The basic Yellow Chartreuse has received more modest (though still average or above) ratings.[6]