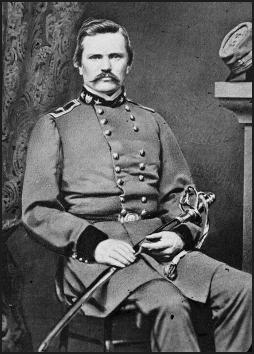 Simon Bolivar Buckner (, ndash , ) was a career U.S. Army officer and a general in the during the , the officer who yielded to 's famous demand for "unconditional surrender" at the in 1862. He later served as governor of and was an unsuccessful candidate for on the National Democratic Party (or "Gold Democrats") ticket in 1896.

Buckner was born at the "Glen Lily" estate in Munfordville, Hart County, . He graduated from the in 1844 and was commissioned a brevet in the 2nd U.S. Infantry Regiment. He returned to as an assistant professor of , , and . During the , he served as the regimental . He was wounded at Churubusco, was brevetted to for Contreras and Churubusco, and to captain for Molino del Rey.

After the Mexican War, Buckner was assistant instructor of infantry tactics at West Point (1848&ndash;50), then served on the frontier, in recruiting, and in the commissary department. In 1854, he helped an old friend from West Point and Mexico, Captain , who had resigned from the Army and had no money to travel home. Buckner himself resigned from the Army, in March 1855, and moved to , where he engaged successfully in managing family properties in Chicago. He served in the Illinois Militia, initially as a major, then as and in 1857. He moved to , in 1858, and accepted the commission of captain in the Kentucky Militia.

At the outbreak of the Civil War, Buckner was a and commander of the Kentucky Militia. The state was torn between Union and Confederacy, with the legislature supporting the former, the governor the latter. Thus, the state declared it was officially neutral between the warring parties. The state board that controlled the militia considered it to be pro-ist and ordered it to store its arms. Buckner resigned on , . After Confederate General captured , effectively violating the state's neutrality, Buckner accepted a commission as a in the on , , and was followed by many of the men he formerly commanded in the state militia. He became a division commander in the Army of Central Kentucky, under , stationed in Bowling Green.

After now-Brigadier General captured Fort Henry on the in February 1862, he turned his sights on nearby on the Cumberland. Western Theater commander Gen. sent Buckner to be one of four brigadier generals defending Fort Donelson. In overall command was the influential politician, but military novice, ; Buckner's peers were and . Buckner's division defended the right flank of the Confederate line of entrenchments that surrounded the fort and the small town of . On , the Confederate generals decided that they could not successfully hold the fort and planned a breakout attempt, hoping to join with Johnston's army, now in Nashville. At dawn the following morning, Pillow launched a strong assault against the right flank of Grant's army, pushing it back 1 to 2 miles. Buckner, who was not confident of his army's chances, and not on good professional terms with Pillow, held back his supporting attack for over two hours, giving Grant's men time to bring up reinforcements and reform their line. Fortunately, Buckner's delay had not prevented the Confederate attack from opening a corridor for an escape from the besieged fort. At this time, however, Floyd and Pillow combined to undo the day's work by ordering the troops back to their trench positions.

Late that night, the generals held a in which Floyd and Pillow expressed satisfaction with the events of the day, but Buckner convinced them that they had little realistic chance to hold the fort or escape from Grant's army, which was receiving steady reinforcements. His sense of defeatism carried the meeting. General Floyd, who was concerned that he would be tried for treason if captured by the North, sought assurances from Buckner that he would be given time to escape with some of his Virginia regiments before the army surrendered. Buckner agreed and Floyd turned over command to his subordinate, Pillow. Pillow immediately declined and passed command to Buckner, who agreed to stay behind and surrender. Pillow and Floyd were able to escape, as did cavalry commander Colonel . That morning, Buckner sent a messenger to the Union Army requesting an armistice and that a meeting of commissioners be set to determine the terms of surrender. He was hoping that Grant would offer generous terms, remembering the kind assistance he gave him when Grant was destitute. However, Grant had no sympathy for his old friend and his reply included the famous quotation, "No terms except unconditional and immediate surrender can be accepted. I propose to move immediately upon your works." Buckner had no choice but to respond:

SIR:—The distribution of the forces under my command, incident to an unexpected change of commanders, and the overwhelming force under your command, compel me, notwithstanding the brilliant success of the Confederate arms yesterday, to accept the ungenerous and unchivalrous terms which you propose.

Grant was courteous to Buckner following the surrender, and offered to loan him money to see him through his impending imprisonment, but Buckner declined. The surrender was a humiliation for Buckner personally, but also a strategic defeat for the Confederacy, losing over 12,000 men and equipment, as well as control of the Cumberland River, which caused the evacuation of Nashville. Buckner was a Union at Fort Warren in Boston until , , when he was exchanged for General . The following day he was promoted to .

Perryville to the Trans-Mississippi

Buckner joined 's 1862 invasion of Kentucky, fighting as a division commander in the Army of Tennessee at the . He was reassigned to command the District of the Gulf, fortifying the defenses of , until April 1863. Returning to the Army of Tennessee, he fought as a corps commander at the , and then as a division commander under in the . In the spring of 1864, he commanded the Department of East Tennessee, but spent considerable time in , where he became known as "Simon the Poet" for his hobby of writing poetry.

In August 1864, Buckner was transferred to the Trans-Mississippi Army as a corps commander. He was promoted to lieutenant general on and became chief of staff to Gen. .

Journalist, governor of Kentucky, and defender of the gold standard

After his army surrendered, Buckner was paroled in , on . The terms of his parole prevented his return to Kentucky for three years, so he lived in New Orleans, where he worked on the staff of the "Daily Crescent" newspaper. He returned to Kentucky when he was eligible in 1868 and became editor of the Louisville "Courier" until 1887. During this time he, like most former Confederate officers, petitioned the for the restoration of his as was provided for under the terms of the 14th Amendment.

Buckner was the vice presidential candidate for the National Democratic Party (or "Gold Democrats") in the 1896 elections. His presidential running mate was John M. Palmer, who had been a Union general.

The Democratic Party was split, due to the economic depression that occurred under Democratic President , and nominated for the presidency.

Buckner opposed Bryan's call for "", which was a plan to place the value of silver to gold at a 16-to-1 ratio, and then to tie the U.S. dollar to that value. This plan ran contrary to the world market value of silver and gold, which was then about 32 to 1. Buckner believed that Bryan's plan would have ruined the American economy. In waging this quixotic campaign, he was present at the "last stand" of as a political movement in the 19th century.

Buckner and the other founders of the National Democrats were disenchanted Democrats who viewed the party as a means to preserve the small-government ideals of Thomas Jefferson and Grover Cleveland, which they believed had been betrayed by Bryan. In its first official statement, the executive committee of the party declared, the Democrats had believed “in the ability of every individual, unassisted, if unfettered by law, to achieve his own happiness” and had upheld his “right and opportunity peaceably to pursue whatever course of conduct he would, provided such conduct deprived no other individual of the equal enjoyment of the same right and opportunity. [They] stood for freedom of speech, freedom of conscience, freedom of trade, and freedom of contract, all of which are implied by the century-old battle-cry of the Democratic party, ‘Individual Liberty’.” The party criticized both the ist policies of the Democrats and the of the Republicans.

Palmer and Buckner received just over 1 percent of the vote in the election. Apparently many supporters of the ideals of the National Democratic Party voted for McKinley because of his support of the and the fact that he was perceived as having a good chance to win the election.

At the time of his death, Buckner was the only surviving Confederate officer over the rank of brigadier general. He died in , and is buried at Frankfort Cemetery in .